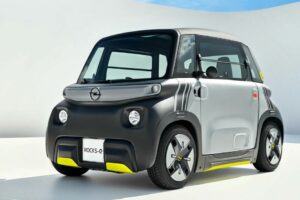 For all the platform sharing going on within the world’s biggest automotive groups, we don’t often get a straight-up rebadge. This week, though, Opel has delivered the goods via the Rocks-e, which appears to differ from the Ami produced by sister brand Citroen in branding and colour schemes but little else.

We’ve had a good gander, and the only other visual differences we can spot are some alterations to the sills, new rectangular protectors on the wheel arches, and chunkier protruding bits on the lower front bumper. Oh, and the wheels aren’t the same.

Otherwise, it’s all as per the Rocks-e’s near-identical twin from across the border. Measuring 2.41 metres long, it’s only slightly larger than a Renault Twizzy, yet is fully enclosed. There’s seating for two, with the passenger placed to the side but set slightly further back from the driver.

The Rocks-e gets an asymmetrical door arrangement, with the driver’s door hinged at the rear, and the passenger’s hinged at the front. The front and rear bodywork is interchangeable – all that changes is the little round light clusters, and the addition of the ‘Rocks’ logo on the back. You might just about remember that designation from the short-lived Adam Rocks and Karl/Viva Rocks.

Propulsion comes from a 5.5kWh battery pack and a small electric motor, providing 8bhp, a 28mph top speed, and a range of up to 47 miles. Plugged into a regular domestic plug socket, the Rocks-e takes around three and a half hours to charge.

Since it’s classified as a quadricycle rather than a car, a driving license isn’t needed to drive it in many European countries, and depending on where you live, it’s possible to get behind the wheel legally from the age of just 14.

The Opel Rocks-e will launch in its native Germany first, with buyers given the choice of entry-level, Klub and TeKno trim levels. By 2022, it’ll be available in other European markets.

Which would you have – the Ami or the Rocks-e?