While you weren’t paying attention, the Range Rover lineup split into four sizes of vehicle: The Range Rover is the biggest, followed by the Range Rover Sport, then the Velar and finally the Evoque. The Velar is basically the size of the Jeep Grand Cherokee from nose to tail. If that’s the size of vehicle you’re looking for, and don’t mind spending anywhere from $56K to this SVAutobiography’s $90K tag, you’re in luck, especially if you like meaty V8s, because that top trim is the only way to get Land Rover’s glorious 5-liter in the Velar.

And what a mill it is. It sounds angry on startup and warmup. Before we even got in the Velar the kids were asking “is it fast!?” I said “yes,” and sadly, “probably faster than my Mustang.” It sounds better than my Mustang too, with a bark on startup and a low rumbly idle. The 2020 Velar is neck-snappingly fast from a standstill, as in 0-to-60 mph in 4.3 seconds. The eight-speed automatic is perfect in every way, making midrange punch almost as good as standing starts. The Velar has paddle shifters if you want to swap gears yourself, but I never felt the need. 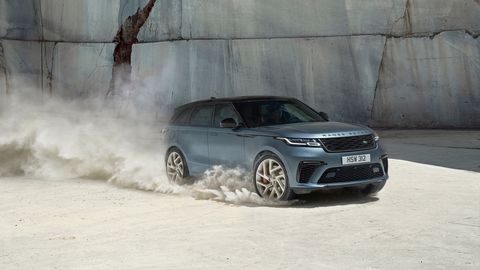 The 2020 Velar SVAutobiography’s suspension is surprisingly stiff, even in comfort mode. I like a sports-car feel but if you have the range of adjustment to do both harsh and soft, make it a wide spread of suspension setups. I didn’t try the off-road and rock modes. They’re usually a little softer. The electronic power steering was perfectly tuned, and the tighter suspension made it fun to zip through traffic (that’s your tradeoff). Range Rover says the steering system is “SV tuned,” which is different than the rest of the Velars.

What you get with the SVAutobiography edition is a ridiculously high-fashion interior complete with diamond quilting and accent stitching on the seats, knurled aluminum controls, a new sports steering wheel and 21-inch wheels. Extra on this example were the $1,300 Driver Assist Pack with adaptive cruise, high-speed emergency braking, park assist, 360-degree sensors, rear traffic monitor and a surround view camera system and the head-up display, which is another $970. 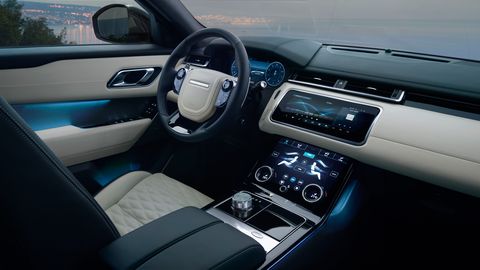 The materials and craftsmanship are impressive, but an overall clean look and tech improvements are the real bonus here. The Velar’s two-screen control system looks clean with the media/nav information on top and the climate and drive settings on the bottom. The top screen pivots an inch or two to keep the sun from reflecting and I had zero hitches or glitches over the three days I drove it. It’s quick to react too. The only time it was a little slower than expected to start up was when I quickly clicked the gear selector in reverse as I started the Velar. By law the rearview camera must show up immediately after the gear is selected, sometimes to the detriment of other infotainment systems on startup. I think that’s what happened here.

The Velar’s second row is just a little tight for two kids. Both car seats fit no problem, but I had to move the passenger seat way up to get it out of range of the littler kid’s feet. The cargo area is just under 30 cubic feet, which is a little bigger than the Audi Q5 and smaller than the Lexus RX, the two leaders in the class.

The Range Rover name does add about a $10K premium over the Audi and the Lexus in base form, and like I said, the premium SVAutobiography is a good bit more than that. But, at least in the public’s eyes, the Range Rovers are a breed apart regarding what it says about your life. Upper middle-class people buy Lexuses and Audis; rich people buy Range Rovers, they would say. No one told them the Evoque is about 42,000 bucks, or, just a little more than a maxed-out Ford Fusion.

The Velar does look great, better than the Lexus, or Audi, or BMW X5 or Acura MDX. But again, it’s more expensive, so it should. If your concern is power, you can only get a V8 in the X5 and the Porsche Cayenne in this size. If you want something easy that will do everything well, but nothing spectacularly, get the Lexus RX.