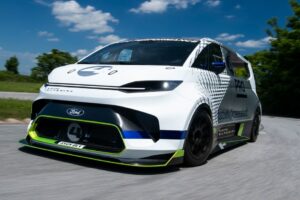 Forget the BMW M3 Touring, GMA T.50 supercar and Prodrive P25, Ford has unveiled its wildly powerful Electric Supervan just in time for Goodwood, where it will debut in the metal alongside them. With 1,972bhp it’s set to be the greatest delivery vehicle of all time.

All joking aside, the Electric Supervan will be a modern, electrified take on Ford’s iconic Supervans, which are high performance one-offs loosely based on the trusty Transit. The Supervan tradition started in 1971, and three of these vans with race-car performance had been built over the years from previous iterations of the Transit – Supervan 3 debuted in 1994 and was powered by a V8 Cosworth engine, but the latest Supervan will be the first with an electric drivetrain.

The 2022 Ford Pro Electric Supervan is powered by four electric motors that get their power from a 50kWh battery and dedicated control system, capable of a whopping 1,972bhp. That means it’s twice as powerful as a Ferrari LaFerrari supercar. With a 0-62mph time of under two seconds, it’s also facebendingly quick off the mark.

The Electric Supervan uses the floorpan from an E-Transit Custom, a steel spaceframe and lightweight panels all-round to keep weight down. It looks the part, too – a large front splitter, rear diffuser, side skirts and rear wing helps stick it to the tarmac as well as lend it a mean look.

To get all that power down, the Electric Supervan is also fitted with double wishbone suspension all-round as well as heavy duty subframes, uprights and brakes, plus a roll-cage and some bucket seats to cocoon any driver brave enough to drive it. Despite all these race-car elements, there’s still room for load space behind the driver, so the Supervan is still true to its utilitarian roots… somewhat.

It’s not an exclusively no-frills, spartan affair though, as the Electric Supervan is fitted with some gadgetry such as a Ford SYNC system with Wi-Fi connectivity lifted from the Mustang Mach-E. It’s fitted with a range of driving modes: ‘Road’, ‘Track’, ‘Drag’, ‘Drift’ and ‘Rally’. There’s even an ‘Eco’ mode that decreases energy consumption at low speeds.

The Electric Supervan will be setting times at the Goodwood hillclimb this week. It’ll be interesting to see what a 1,972bhp Ford Transit will be capable of with Romain Dumas (the current Goodwood hill climb record holder) at the wheel.