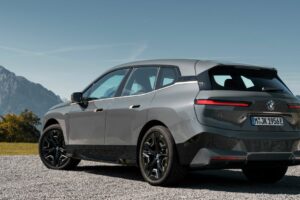 The BMW iX is hardly wanting for power as is. Even the entry-level xDrive50 makes 316bhp, and the 50 is good for a whopping 516bhp. The German manufacturer has decreed it needs more shove, however, so, at the Consumer Electronics Show (CES) in Las Vegas, a new flagship iX has been revealed.

Key to the big increases is a new six-phase operated rear motor with a double inverter, BMW says. The iX M60 will only deliver its full torque output in Sport mode with launch control enabled, otherwise you get ‘just’ 749lb ft. Switch to ‘Normal’, and the torque stays the same, while the power dips to 525bhp.

Feeding the M60’s two motors is the same 105.2kWh battery pack as other iX derivatives. This means the range drops only slightly to 357 miles according to the WLTP cycle, with an average consumption of 22.5 – 18kWh per 62 miles travelled.

There aren’t many chassis changes on the agenda, but BMW has given the M60’s air suspension an M-specific fiddle.

The exterior doesn’t deviate too much from other iX models either, with the M60 receiving only minor tweaks including blue-painted brake calipers, high gloss black/titanium bronze M logos and a titanium bronze finish for the 22-inch aero wheels.

There’s an air of familiarity to the interior, too, but you do get a whole lot more gear in there as standard. BMW Live Cockpit Professional, a Bowers & Wilkins surround sound system and ‘Active Seat Ventilation’ for driver and passenger are among the items on the factory-fitted kit list.

You will pay dearly for all that extra stuff and the additional performance. The starting price is £111,905, some £15,000 more than the already fast and well-appointed iX M50.