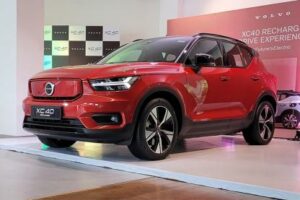 It felt so different when I tried to push the car. It pulled with ease without making any sound which is the exact opposite experience that you get from an ICE vehicle.

BHPian Rachet recently shared this with other enthusiasts.

I happened to test drive the Volvo XC40 Recharge . Thought of sharing my experience with you all.

Starting off with the exterior designing. The whole car looks the same , nothing much has changed with respect to the exterior.The front grill is now closed. There is a Recharge inscription on the C-pillar. The rear end has not changed at all . There is a badge to indicate its Recharge.

The ground clearance of the car has been reduced by 40mm . The normal version of the XC40 has about 210mm of GC , and its 170mm in this one.

Because of the motor and battery pack placement, the space saver tyre has moved up to the boot eating up the space inside. In the normal version it is placed below the boot: In the absence of an engine, the car gets a front trunk where the charger goes: I have always been a fan of Volvo’s minimalistic interior design. Everything is very neatly laid out. The use of materials inside is the same as what you get to see in the normal XC40. The quality of plastics used is good: There are well planned storage pockets inside the car.The doors get bottle holders, the glove box serves the purpose, the space below the armrest is okay. A small trash can below the arm rest is a nice thought.

The panoramic sunroof gets a swipe to open/close feature which works just fine.

The front two seats get electrical adjustments and only the driver gets memory function. Nice touch of Alcantara in the seats. The seats are really comfortable: A 13 speaker 660 watt Harman Kardon music system is available which does a decent job:

You will be sitting a bit upright in the rear seats. The visibility is good. Nice knee room and head room as well. The presence of the arm rest also adds to the comfort. The rear seat passengers also get two AC vents and two USB-C charging ports: The huge central tunnel makes it difficult to squeeze in a third person in the middle. Okay for short trips. The raised floor because of the battery packs also affects the under thigh support. The shoulder room with three people sitting is average.

Driving an EV is something that we need getting used to. I could not feel a thing sitting inside the XC40 Recharge. If you are someone who enjoys the engine roar when it comes to life then you will be disappointed. Here you won’t even know when the car is started. It’s a strange feeling.

The twin motor setup produces 408hp and 660 Nm of peak torque which was insane for a car of that size. No wonder it is able to do 0-100 in 4.9 secs. The ease with which the car moved was so amazing. The ride was comfortable on the 19 inch wheels. It felt so different when I tried to push the car. It pulled with ease without making any sound which is the exact opposite experience that you get from an ICE vehicle.

The car also gets a 360 degree camera with sensors which was absent in the normal XC40. The resolution of the camera is great: Adding to the safety features is the blind spot monitoring system which blinks and indicates whenever a vehicle passes by: The WLTP range is 419 kms on a single charge. Volvo recommends a service in 30K kms against a service in 10K kms on a normal XC40.

Volvo has not announced the prices yet but the expectation is somewhere around Rs. 70-75 lakhs.