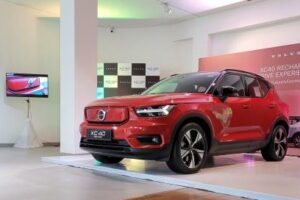 This is the third electric car that I drove after the MG ZS EV and Hyundai Kona Electric.

BHPian cbrspn recently shared this with other enthusiasts.

Went to Krishna Volvo in Chandigarh today to check out the XC40 Recharge and take a test drive. They have organized a 3-day launch event and today was the last of that. Just entering the showroom, it felt a bit underwhelming, not as much flair or footfall as I expected.

That did mean that I got special attention from the sales advisor and marketing folks on the floor. I had gone with my fiancee and we wanted to get a feel of the car. Coming from petrol cars, I drive an MG Astor while my Fiancee’s steed is a 2020 Honda City.

Coming from the C2 segment, which is the hottest segment in the Indian market today, I had high hopes from the XC40 Recharge, after getting a bit underwhelmed by the (pre-facelift) ZS EV and Kona Electric.

The XC40 Recharge was the third EV I drove after the ZS EV and the Kona Electric. I had some mixed feelings after the experience. Right from the gate, I made it clear to the SA that I don’t have an active interest to buy the car, but I am looking at it as an enthusiast. He was kind enough to ensure I was told everything anyway and didn’t push for a sale, just focussing on the experience.

Note: A large part of this has been covered by BHPian Rachet in his awesome review, so I shall keep it short to save time and avoid repetition.

One of the reasons I was interested in the XC40 is because of how it looks. IT IS A LOOKER. Volvo just makes the boxy look work in the XC series, and it works very well. The front closed grill looks good on the car, but seeing it at a certain angle, made me feel the car has got Bugs Bunny teeth. The R19 wheels make an improvement in the stance over the R18 of the normal XC40 even with the reduced GC. However, I am slightly concerned about how the slight difference in circumference and diameter between the front and rear tires would translate in the AWD over the long term.

Overall though, the car is beautiful and the character lines are very proportionate. In the targetted segment, the only competition is the BMW i4 currently, and that is a different car type altogether, so Volvo gets free reign for the time with people looking for an SUV/Crossover.

First thing first. Immediately as I entered, I felt the car was a lot smaller than the Astor. It took me a while to find my seating position in the driver’s seat, which was strange as I am usually comfortable in any car, from an 800 to a 330Li, even the petrol XC40, and it takes less than 30 seconds to get to optimal.

It took me a few minutes to understand that this was happening as the floor of the car was a bit higher compared to the petrol, leading me to have close to no under-thigh support. Interestingly, the sales guy said that the seats are 6-way power-adjustable, but I counted 8 (recliner: forward/back, seat: up/down/forward/backward/front horizontal tilt up/down).

Note that this was only my experience, and I measure 6’0 in height. My fiancee who is about 5’2 wasn’t bothered by the floor. This issue was even more profound in the rear seats. As there were no adjustments possible there, I felt very uncomfortable even when the front seat was adjusted to provide the maximum possible space in the back. The very upright seating arrangement in the rear, which the sales guy mentioned is because these seats are designed by doctors, and the higher floor made me unable to sit in the back. I didn’t click any pictures as I was too eager to drive it.

Other than the floor issue, the interiors were lovely, the same as the XC40. The Alcantara (or whatever this material is called) in the doors and seats was nice to feel and was right at home with Volvo’s minimal design language. Volvo has made some clever use of space, and ensured well-sculpted storage spaces, in the doors, the armrest, and more. Especially like the little trash can under the armrest, very functional without the usual blocking of the cupholder trash cans we get from Amazon. The 13-speaker Harman system paired with Google’s Android Auto system provides a good entertainment system.

I will say though, that the C2 segment Crossover/SUVs have come a long way in making interiors feel plush. The standards set by the C2 segment, especially the Astor’s material and City/Creta’s seat comfort make me feel short-changed when I drive a car worth 3x as much. I guess after a point, the value economics get thrown out for luxury.

Now the most exciting part, the drive. I drove the car on an empty stretch in the industrial area. No matter how many electrics I drive, the instant torque is just addictive. At 40kmph, floor the pedal, count to 3 and the car will have you at 100kmph. Despite my fiancee’s objections, I did a 0-100 test and was able to measure it at 5.5s. These numbers always take the driver’s comfort with the pedal out of the equations.

For the longest time, I have drooled over the 2.0 BMW B48 in the 330Li. The sheer power is mind-blowing to me. And then comes Volvo, putting 400 bhp and 600Nm in a “small” car. It’s bonkers and actually faster than the Mustang Fastback that was available in India before Ford bade us goodbye. This has to be one of the most fun drives I’ve had. The enthusiast in me wanted to write a cheque and bribe the showroom to get the first car possible, even if it was way out of my budget.

Volvo calls regen-braking “One Pedal Drive” mode. The One-pedal drive feature is buried deep in a menu on the center display, and could definitely use a short-cut button. The same is true for a lot of features. Speaking of one-pedal itself, I felt the regen-breaking was way higher than even KERS L3 on the MG ZS. Take your foot off the pedal and you can feel the car bending forward and it came to a halt from 60 in mere moments.

One interesting observation she made was that even though it was one of the fastest cars she has experienced, the silence of the car and the heavy build made her feel the safest. She always feels a bit uneasy when I go into manual mode on our highway runs and use the sound of Turbo and exhaust as music. But here, she didn’t even know we crossed 160 at one point until I mentioned it to her later. Cue a slap on the shoulder about how my love for cars makes me crazy.

Overall, I do feel that Volvo have a winner at their hands, and they are coming with the first-movers advantage in the segment. There’s some cross-shopping between sedans and crossovers in this segment, so only time will tell what the i4 does. One thing to note is that the segment below, with the ZS EV, Kona Electric and the likes, certainly gives good competition to the “upper class” now.

Electric has shortened the performance gap. With the ZS EV, at 35% cost, you get 80% of what the XC40 offers with a slightly slower motor but more space. Haven’t seen anyone complain about the Astor/ZS 2022 interiors yet, rest time will tell.

The SA mentioned the expected price to be in 60L-70L, and I do feel it’d be a bit overpriced.