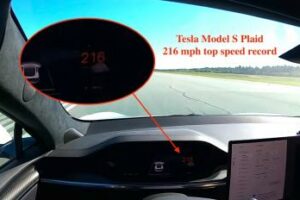 Now, a Quebec-based tuner – Ingenext, has managed to get around the software limitations on the Model S Plaid to completely unlock its top speed. According to media reports, Ingenext CEO, Guillaume Andre got behind the wheel of the unlocked Tesla Model S Plaid and managed to reach a top speed of 216 mph (347.6 km/h) for the first time. The speed run took place at Trois-Rivieres airport in Quebec, Canada.

Reports suggest that the only modifications made on the Tesla Model S Plaid, apart from bypassing the software restrictions were the addition of bigger brakes from Mountainpass Performance and higher performance tyres (Michelin Pilot Super Sport) – mainly for safety purposes.