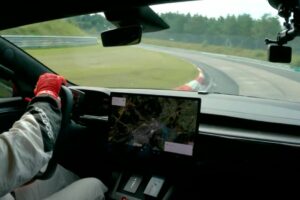 Nearly two years on from first showing up at the Nurburgring with a drastically modified Model S and then leaving without posting a time, Tesla has now delivered the Green Hell goods. The new 1007bhp Model S Plaid has been seen tearing around the Nordschleife for the last few weeks, and today CEO Elon Musk tweeted a pair of lap times achieved by the car: 7:30.909, and 7:35.579.

The former is a whopping 11 seconds faster than the time set by Porsche Taycan Turbo in August 2019. Musk said the car was “Completely unmodified, directly from factory”. A Model S Plaid was spotted at the track with the infamous yoke switched for a more conventional steering wheel, however, footage of the slower lap features the former. At the time of writing, a video of the faster lap had not been posted.

We don’t like the idea of going opposite lock with a yoke attached to a steering rack with a ratio of 14.0:1 (2.3 turns lock to lock), but the 7min 35sec lap is free from such drama. There’s a hefty amount of tyre squeal, which is inevitable for a vehicle tipping the scales at nearly 2.2 tonnes. The weight will be a big factor in the Model S Plaid’s inability to match the outright saloon record, currently held by the considerably less powerful but lighter and more focused Jaguar XE SV Project 8.

The Jag set a 7:18.36 in 2019, and the next year, the Mercedes-AMG GT 4-Door (which technically isn’t a saloon) managed a 7min 27.8sec lap to claim the very niche “luxury class” record. But still, the Tesla’s 7:30 is impressive enough for a car that isn’t designed for on-track shenanigans, even if it does have a big power advantage.

That figure will come down, but not via a stock Model S Plaid. Musk has pledged to send around a modified version with additional aero devices, carbon ceramic brakes and stickier track tyres. It doesn’t sound like these will form part of an official track package, though, as at the end of the Tweet he added, “all things that can be done without Tesla being in the loop.”