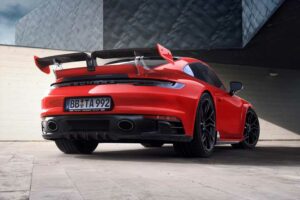 We're already convinced it's the best 992 Carrera you can buy. Techart reckons it can go one better…

At the risk of repeatedly and witlessly banging the same drum, we’re rather partial to the current Porsche 911 GTS. This is not a huge shock. Its predecessor was very good, too. And the one before that. Which is handy, because, as we might have previously mentioned (several times), the GTS is a brand-new, performance-orientated 911 you actually stand a fair chance of buying without having to learn the secret handshake required to access the GT3 from new.

Of course, that means Porsche builds the GTS to a specific margin that doesn’t seek to overshadow the GT3 in any regard, be it output or handling or aerodynamically. But the aftermarket isn’t bound by those red-line limitations; hence the passing interest in what German tuner Techart has done with its latest ‘sporty program’ for the current model.

The firm is hardly alone in seeking to tweak the output of the omnipresent 3.0-litre turbocharged flat-six, but it’s worth noting that the 80hp upgrade delivered by the ‘electronically integrated’ Techtronic performance upgrade takes the GTS to 560hp – significantly beyond the 510hp offered by the 992 GT3. Somewhat predictably, the difference in torque is even more eye-opening: 494lb ft being a long way indeed from the 347lb ft coaxed from the naturally aspirated 4.0-litre unit.

Plainly ‘more’ doesn’t mean ‘better’ – but it does mean quicker. In conjunction with the PDK transmission, Techart reckons its Powerkit-equipped rear-drive car will do 0-62mph in 3.1 seconds, equalling the time quoted by the manufacturer for the all-wheel drive version of the GTS. Assuming you’ve put it in Sport or Sport Plus, that is; in Normal mode, the tuner returns the car to its regular output to take advantage of its ’standard consumption values’.

It has been busy elsewhere, too. Alongside bespoke, centre lock wheels, you can have an adjustable Techart coilover spring set that will allow you lower the 911 by as much as 40mm. The firm will also fit a nose lift system if you didn’t go to the trouble of ticking the box originally. Inside, it reckons the choice is ‘limitless’ thanks to master upholsterers at the factory, although it draws particular attention to the new Techart roll bar, which is said to be designed according to FIA regulations, and its branded six-point harnesses. Remind you of anything?

It goes without saying that if you’re going the whole hog inside, you might as well cover off the exterior. The wind tunnel-tested Techart Aerokit features a new front spoiler, grille, splitter and covers, side skirts and rear diffuser add-on. Then there’s a choice of rear spoiler – although obviously the one you’ll want to know about is the ‘futuristic’ fixed wing. Those clear supports are made Makrolon (an especially tough sort of polycarbonate) and it includes the boot lid with brake light and integrated intercooler openings for the sake of cooling. ‘The athletic aerodynamic package makes it immediately clear: this is not a production GTS,’ notes the blurb. Can’t argue with that. Question is, would it make up for not getting your hands on a GT3 to begin with? Answers on a postcard…