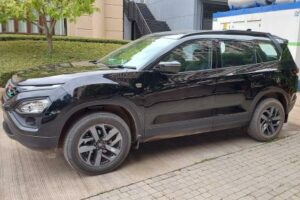 I don’t know what prompted me but I just added a comment regarding fit and finish issues in my Safari and mentioned hopefully the JET Edition won’t have these issues.

BHPian negi15 recently shared this with other enthusiasts.

So the #JET Edition was launched with much fanfare. All social media have photos of three siblings (Nexon, Harrier and Safari) dressed in same clothes. This reminds me of some movie scene where each kid of family is dressed in a similar manner irrespective of age. The Punch may be feeling neglected. That’s not fair.

To my surprise, I was contacted by Tata Motors regarding the post and they mentioned that their team will take care about it. Dealer also called and I summarized everything over an email (with snaps) which had dealer as well as Tata Motors people on it. Four days passed and nothing happened. So, I asked them about any updates.

Now comes the funny part and it comes directly from Tata Motors. I got an email reply mentioning that their team had a good look at issues raised by me. All the fit and finish issues I reported are “characteristic” of the car and I should not be “apprehensive”. They also mentioned that they can also demonstrate such “characteristics” on similar variants of the Safari. So, actually their QC departments has turned the fit and finish issues to “characteristics” of the car, instead of resolving them over two years since launch. Or may be I am the only one who reported these issues to them. I have given them a piece of my mind over the same email chain and mentioned that I would take the liberty of sharing the email reply with any Tata Motors higher management in case I couldn’t find any solution easily and hopefully they should not have any issues. I also mentioned to ask them to tell all dealers that such issues are characteristics of car and they should not promise to get them resolved in the coming days. Even better way is to list out these characteristics as features in brochures so prospective customers can know about them too.

However, I still have requested them to “demonstrate” the gap between seat frame and fabric on second row on both sides. Recently, I went to fit side-steps at some shop and found another Dark XZA+ owner who mentioned he doesn’t have such issue. Hopefully, they don’t revert and say that this other Dark XZA+ I am referring to is not following characteristics of the Safari and hence will be fixed instead of mine.

Well this instance makes me think that Tata Motors’ primary focus lies on the mid segment. The Harrier and Safari are just there to make portfolios. With God’s grace, the Wanderer has been running fine and its 2K on the ODO. I do wish my interaction with Tata Motors remains minimal. Amen.

Check out BHPian comments for more insights and information