Home » Auto News » Tata fails to resolve issues on my Harrier AT; wants to replace engine

Tata fails to resolve issues on my Harrier AT; wants to replace engine 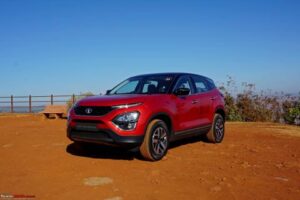 The technicians did not have a clue of what the real problem is but acknowledged that the vibrations are abnormal. Any problem on fuel injection side was also ruled out.

BHPian kapilnitdg recently shared this with other enthusiasts.

I wanted to highlight the hardships I am facing to resolve issues and niggles on my Tata Harrier XZA Purchased in Dec 2021. After spending nearly 1.5 months of 6 months ownership at the service center, now the company is asking me to replace the engine on the car! Its like replacing the heart of the car which has barely managed to complete 6k kms and 6 months.

This is completely unacceptable and shows the poor quality checks standard being maintained by Indian Car Manufacturers.

I want the Team BHP community to help me highlight this issue to higher authorities at Tata Motors and press for car replacement. Wanted to understand the opinions and options that I have, given my car is facing issues and Niggles from day 1 of purchase.

Ordeal from 1st Day of delivery

I took the car to the service Kropex service center and they told me that it could be minor issues. They were not able to diagnose the issue for 6 days and finally figured out that the clunking sound was coming from the front suspension and the problem was resolved after retorquing.

For steering they told the screeching noise from the engine bay is solved after doing steering bleeding and sent the vehicle. When I test drove the vehicle again the noise was present and they advised they will look into the problem during second service and I can continue driving the vehicle as its not a big problem

During second Free service, I decided to visit Prerna Motors Kudlu this time given my bad experience with Kropex. I gave my car with the below issues:

All these issues were present from day 1 of purchasing the vehicle.

The SC replaced the following parts:

The technicians did not have a clue of what the real problem is but acknowledged that the vibrations are abnormal. Any problem on fuel injection side was also ruled out.

The car is at the Prerna service center from one month but they are unable to rectify the idle vibration issue. Today I got a call from the customer care manager that the car engine is faulty and needs replacement. Though they have provided me a loaner car, but I am really tired of new issues cropping up on the car and seeking engine replacement on a new car speaks about the quality check process at Tata Motors where they passed a defective car to the customer which should have been caught during the checks at the plant.

I want to press Tata to replace my vehicle as I am not sure of the long term reliability of the vehicle after going through engine replacement. To be honest, I had a really harrowing experience with Tata ASS and given the quality checks are soo poor at the company there are a lot of cases of issues and niggles cropping up even on new cars.

I have dropped multiple emails to the higher ups at Tata Motors but I never heard back from them. Speaks volume about how much they care about their customers!!

Want help from Team BHP to highlight my plight and provide me suggestions and next course of action that I could take from my side.

Here;s what BHPian Jeroen had to say on the matter:

Very sorry to hear about your ordeal. Whereas it is understandable you are looking for a new car, So would I, I doubt they will offer you one.

But realistically a full engine swap is not necessarily a bad thing either. When properly done, reliability should not be affected at all.

I would make sure to get something in writing about them guaranteeing this will solve all your problems.

I would also be interested to understand why they believe an engine swap is in order. You want to have clarity as to what the root cause is/was. If anything to get some confidence the new engine will solve your problem.

Steering and stability problems don’t sound like engine issues to me.

Here’s what BHPian viXit had to say on the matter:

Ask for root cause analysis.

Ask for screenshots of any errors if they are popping up on the diagnostic scans.

These are very vaguely described issues and can be due to n number of issues, it would help to know why they have decided that an engine replacement is in order.

For all we know they can’t diagnose it properly, and this could end up becoming another thread like this.

An engine replacement so soon in a car’s life in simply UNACCEPTABLE, even for Tata’s shitty standards.

I hope this thread gains some traction, and that you get your new Harrier. But in the worst case scenario, go for the engine swap and ask for an extended warranty on the car free of cost.

When the car is assembled and engine is fitted in the car on the assembly line, it’s done to much higher standards than in the service centre. Think about this, if an engine fitted on the assembly line is this bad, how much worse the SVC install will be. Push for the extended warranty ,no two ways about it.

Here’s what BHPian RedMaw had to say on the matter:

I thought the FCA engines were quite robust. I am sorry to say this but experts in this forum can confirm, it looks like you have been sold a lemon. I would say cut your losses and sell it after engine change. It has been said many times in this forum, that buying high end TATA cars are a hit or miss. It seems like for you its a miss. Its absurd that even after selling close to 5000 vehicles each month, TATA is not able to resolve all niggles in Harrier and Safari. Either their QC is pathetic or TATA just did not care about their high-end customers.

Here’s what BHPian Captain Slow had to say on the matter:

I would let them replace the engine, ask them for a extension in the warranty for the trouble you have gone through.

Pardon my ignorance – If the Engine is replaced would you need to update your RC card and insurance with the new Engine number? Or would they produce a new engine with the same engine number that’s on your car right now?

Please get this clarified from your SA/Customer care.

Here’s what BHPian Meph1st0 had to say on the matter:

It is sad that you have to go through all this with a new car.

However, replacement with a new car will most likely not happen.If the engine is faulty there isn’t much that can be done, it has to be replaced. What you could do is the following: