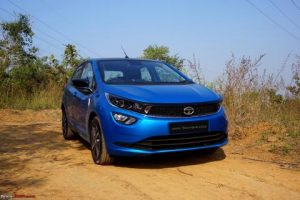 The Tata Altroz is an impressive car. It has good looks, likeable interiors and excellent road manners. Earlier, choosing between the petrol and diesel was easy. The naturally-aspirated petrol was weak and simply didn’t have the go to match the show. Now though, Tata Motors has introduced a turbocharged petrol engine in the hatchback. This engine has enough grunt to make the Altroz move at respectable speeds, although it’s no hot hatch. Now, there is not much to choose between the turbo-petrol and turbo-diesel when it comes to performance. The difference in price between the two is Rs. 40,000 – 60,000, depending upon the variant. If you were to buy the Altroz, which engine would you pick & why? The 1.2L turbo-petrol produces 109 BHP and 140 Nm. It has good driveability and very little turbo lag. The healthy bottom-end makes the turbo-petrol Altroz an easy car to drive in the city. The focus is more on drivability and practicality, while providing adequate performance. This is a very smooth engine, even as the rpm needle climbs high. Enthusiasts will love the engine note too. Besides, it comes with a Sport mode. However, it is not a high revving motor (merely 5500 rpm rev limit) and when it comes to performance, it’s nowhere as explosive as the Polo TSI or even Hyundai’s 1.0L turbo. Apart from that, it does not come with an Eco mode and is not as fuel-efficient as the turbo-diesel. Don’t forget, the turbo-petrol is available in very few trim levels. Full review of the Altroz Turbo-Petrol Full review of the Altroz Turbo-Diesel