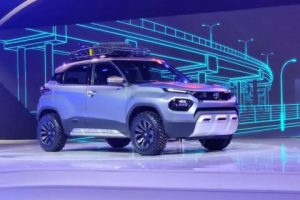 By mid-2021, the carmaker will launch the HBX crossover, which is expected to boost sales even further.

With the launch of the HBX crossover, Tata Motors hopes to increase its market share in the passenger vehicle segment from the current 6-7% to 10% by the end of the next fiscal.

At present, utility vehicles (UVs) make up 40% of Tata Motors’ passenger vehicle sales. With the new Safari in the market, this figure is expected to rise. By mid-2021, the carmaker will launch the HBX crossover, which is expected to boost sales even further.

The HBX crossover is likely to be offered with a 1.2-litre petrol engine producing 85 BHP and 113 Nm. Higher variants might get a turbocharged 1.2-litre motor. While a 5-speed manual transmission will be offered as standard, the car will also get a 5-speed AMT option.

In terms of its design, the HBX is based on Tata’s Impact 2.0 philosophy which was popularized by the Harrier. The crossover gets a similar front fascia with slim LED daytime running lights and headlamps positioned lower down on the bumper.

Overall, the HBX is expected to turn out to be an attractive little pseudo SUV. But, it will soon face competition from Hyundai, which is also developing a compact crossover dubbed the AX1.