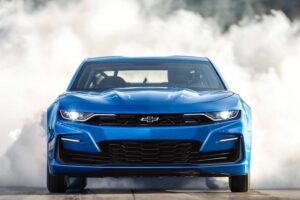 With a new EV class in the Summit E.T. Series, a grassroots, bracket-level program, set to debut next year in the NHRA, Pro Stock driver Troy Coughlin Jr. and Funny Car racer Bob Tasca III are keeping an eye on it.

Both have person reasons for doing so. Tasca debuted the electric Ford Mustang Cobra Jet at the U.S. Nationals last September, and Coughlin’s grandfather, Jeg Coughlin Sr., designed an electric motor package for Jr. Dragsters through his JEGS High Performance company back in 2017—a set-up that can transfer to other classes as the racer ages and progresses in the sport.

Troy Coughlin Jr. said of the JEGS kit, “So essentially it’s the better deal for costs. I think that was Pappy’s (his grandfather’s) major point: ‘Hey, let’s make this a better deal for people to come into drag racing.’ Look at the cost. Yes, it might be a little bit more initially, but over time, you’re saving money, because you just have this one package. It’s whole life. You just build a big car and you make a seat that’s small and you just keep making seats that fit the child and the car. The cool thing is, is you can buy one car and one motor for the whole lifespan of this kid’s career from age five to 17 or 18, when he’s done (with Jr. Dragster class). So the cost is more upfront, but overall it’s less.”

The Coughlins are well-known in bracket-racing circles. Would this up-and-coming Coughlin compete in the Summit E.T. Series?

“If it comes my way and Pappy wants to try it. I’m sure one of us will try it. I mean, there’s 12 grandkids, so there’s a lot of us out there. I’m sure one of us would try it. It’s pretty neat. It’s neat to see the technology come where it’s at and all the manufacturers putting their two cents in with the electronic stuff,” Troy Coughlin Jr. said. “It’s exciting to see something new, but my heart’s with the engines. But hey, something new in drag racing, it’s something to watch, something to see. It’s history. Everything goes in cycles, creates attention and awareness. That’s what we want. We’re always going to have engines and we’re always going to have gas and we’re always going to make noise.”

He said with electric race cars, “You might not be able to hear it, but you’ll be able to see it.” Actually, the electric-powered cars do make a sound, just not one drag racers are used to hearing. “It’s a different pitch,” Coughlin said. “The Pro Stock cars make a cooler pitch in my opinion. That’s just my opinion. But the electric cars, it’s different. And that kind of technology inspires other people. Really, there’s a lot of cars on the local scene. There’s a lot of them out West. There’s some of them on the East Coast. You’d be shocked. We want to get everybody out here.

“Those things have a lot of power, a lot of torque, I can tell you that much. It’s neat. The things that Pappy has told me about the Jr. Dragsters, what they can do, the adjustment with the volts and the watts and the adjustments that you have. It’s impressive,” he said. “It’s really neat once you understand it: how it works and how you make it work and how it fits in with the class. It’s really neat, because at first you don’t really understand how it would fit in. But once you understand how it does fit in with the rest of the class and how it is still a challenge, with the wind and the racetrack conditions and tuning it with the volts and the watts to make the car work and fit in with the class, it’s pretty neat.

Troy Coughlin Jr. said, “Any way we can innovate. I’m all about new stuff in drag racing, because it attracts attention. That’s what we need.”

Tasca said he “was excited that the NHRA announced that (the new EV class). I don’t know the details of it at this point. I have not spoken to Ford since the news came out, so I’d rather not comment, but I know Ford is fully committed in electric series at NHRA. Until I learn more about it, I don’t even want to really comment yet on what Ford’s thinking and what the series is thinking. I’m just excited that they’re doing it. I’d love to be a part of it in some form or fashion. I don’t know what the demands will be, like how many races and where they’ll be. I don’t know if it’ll work with my schedule, but we’ll certainly take a look at it.

“I know one thing: it’s exciting to have a class that’s going to be really state-of-the-art technology. Certainly, though, the OEs are going to have to play a big role in it, because a lot of the technology is still being developed. But you saw what the Cobra Jet did out there in Indy when I drove it . . . It’s an absolute blast to drive, unbelievably quick. And I think this is the next step and trying to formalize a series and letting the OEs really showcase their latest technology and electrification. And I’m certain Ford will be at the forefront. I’m sure like anything else, it’s a competitive nature out there and, and as one starts to do it, the others will follow. But I know Ford is certainly on the forefront of it.”

Only so many companies make electric vehicles, right?

“Well, yes and no,” Tasca said. “The engine technology, the battery technology, this is stuff that all the manufacturers are doing now. So it’s just a matter of putting bigger electric engines and bigger batteries. The concept is exactly what they’re doing on the street. It’s like we do in racing, we just make it go faster and have to make it stronger and we push it to the limit. So it’s definitely within the reach of any OEM that wants to participate. “I’m sure that that there’s interest at the OT (Operational Technology) level. And I think what Ford did with the electric Cobra Jet is a great kind of ‘Here’s what’s possible.’ But hey, we’ll see what NHRA comes out with.”

Tasca said he thinks the NHRA “is a ways away” from any thoughts of assimilating it into, for instance, the Factory Stock Showdown class.

“Oh, I don’t know. I don’t know. I think we’re a ways away. I think, if they asked me my opinion, which they haven’t, I’d like to see that Cobra Jet evolve into like a Pro Stock-style chassis where we could take some weight out of it. Probably make it a little safer, with a full cage, like in a Pro Stock car. And then I think you’d see them running the 7s (seven-second range) pretty easily,” he said. “So, again, I don’t know what they’re thinking, but I can tell you that it wouldn’t take much to make those cars run in the sevens, if you could put them on a Pro Stock-style chassis. So we’ll see. I’m looking forward to seeing what they’re coming out with. And whatever it is, I’m sure Ford is going to take a pretty aggressive position in it.

“I’m excited to hear about what it’s going to be and who knows? If it can work within my schedule, maybe you’ll see me driving one,” Tasca said.