Home » Auto News » Takeaways From the NHRA Gatornationals at Gainesville

Takeaways From the NHRA Gatornationals at Gainesville 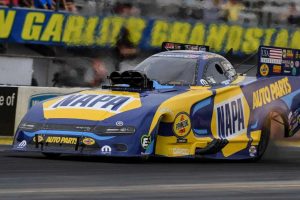 For the first time in 2020, Doug Kalitta left an NHRA event without the points lead in the Top Fuel category, due to a solid pass by Terry McMillen that took the Team Kalitta driver out in the first round of the March’s postponed 51st Annual Gatornationals at Gainesville Raceway in Gainesville, Florida Sunday afternoon.

“I’m not getting discouraged. We will be back at it in St. Louis next weekend and I have three wins there. We can get right back on top with a couple wins,” Kalitta said.

Meanwhile, there was no sign of disappointment in the Top Fuel finale in the Torrence family, as son Steve Torrence beat his father, Billy, with a hole shot that have the younger Torrence the points lead over second-place Kalitta by 26 points, basically what’s awarded for winning one round, so the battle is tight.

Steve Torrence was driving the Don Garlits Swamp Rat tribute car, especially meaningful since Garlits lives in nearby Ocala, where his museum is located, and a Nomex-glad Garlits was on the starting line cheering Torrence on. “I’m ready to drive it!” said Big Daddy Garlits, 88. Asked if his NHRA Top Fuel license was still valid, Garlits said it never expires, “because I invented it!”

Saturday was mostly clear and unseasonably hot, but Sunday, while a little cooler, was Florida-humid, as the NHRA—moving the start time up an hour—managed to outrun the weather radar, which predicted heavy rain by 3:45 p.m., but it held off until 4:55 p.m., allowing all the top classes to finish final rounds without delay. The crowd was surprisingly large Saturday, and reasonably healthy Sunday, though mask-wearing was at a minimum in the stands, so how long that term applies remains to be seen.

Drama was high for the Nitro Funny Car finale, too, because driver Ron Capps laid down the quickest run of the weekend, 3.89 seconds, then blew his engine at the finish line, laying down a massive streak of (sponsor Pennzoil’s) oil that caused him to spin just outside the turn-off gate.

The Don Schumacher Racing crew worked feverishly to repair the damage, and Capps beat teammate Matt Hagan with a run of 3.93 to Hagan’s 3.94—either one winning would have extended Schumacher’s win streak to 10 races. The GatorNats was the seventh race of the season, with four remaining. Capps moves to fourth in the championship standings, 83 points behind leader Jack Beckman.

The 10-race winning streak for DSR goes back to the final three races of 2019. Sunday’s win for Capps was his second in three races and second in the 10-race DSR streak. During the run, Matt Hagan has four wins, Jack Beckman three wins and Tommy Johnson Jr. one.

“We all knew it was Tobler’s birthday and we all secretly wanted to win on his birthday,” Capps said. “But to bring out a car that we had as a backup, that’s never made it to the finish line and it goes 3.93 in the final round of the Gatornationals is crazy.

“He’s had that car up in the trailer since last year when we ran it at ‘Night Under Fire’ at Norwalk (Ohio) and made a check-out run with it and then he put it away for these occasions. With live TV pushing us, we had every team member of Don Schumacher Racing over here working on the car. It was unbelievable.”

In Pro Stock, Alex Laughlin earned his first victory of 2020, shutting down Aaron Stanfield, both Elite Motorsports teammates. Erica Enders, another Elite driver, came into the weekend in the points lead, but lost in the quarterfinals to Jason Line, which moved Line into the points lead.

In Pro Stock Motorcycle, Matt Smith took his 25th career victory after qualifying fastest and beating Andrew Hines, padding his points lead. Victory lane was a family affair for Smith, who celebrated with his father, Rickie, who won in the Pro Mod class.

Here’s how things stand with four races remaining in the NHRA Mello Yello Drag Racing Series season (Remember, there’s no Countdown to the Championship or points re-set this season):