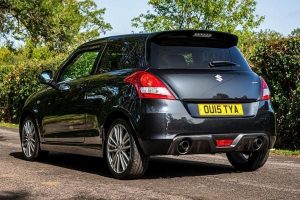 For a third of the 595 Scorpioneoro's price, you can have one of its most entertaining former rivals

In many ways, the Abarth 595 Scorpioneoro that sits atop the PH homepage today is a lone survivor from a bygone era of hot hatchery. It’s the era just before the present one, admittedly, but the jump in tech and equipment has been substantial enough to make it look terminally dated. The Fiesta ST Edition that Matt recently drove reminded us of the progression; for a fee it adds coilover suspension to a proven package that’s normally much cheaper, yet includes Ford’s clever and punchy three-pot engine and a list of cabin and driver convenience features that not long ago we’d have only seen on a top-grade Golf. The class has moved on.

That doesn’t stop us from loving the old ways, though. Behold the Mk2 Suzuki Swift Sport. As Matt alluded to when he borrowed the manufacturer's still-fresh demonstrator so he could write our Used Review back in April, the Swift Sport is a hatchback which lets you explore the full gambit of its handling talent without seriously troubling the national speed limit. And as we all know, that's frequently more interesting than having all the power in the world on tap.

Not that we're calling the Mk2 Sport a slouch. Its naturally aspirated 1.6-litre four-pot produces 136hp at 6,900rpm, so while an 8.7 second 0-62mph time leaves it looking lukewarm, the Swift feels enthusiastic when revved. Consequently, it’s rewarding to work that six-speed manual to extract the best from it, and no less satisfying knowing that all 118lb ft of torque can be dispatched mid corner without fear of understeer. Every last drop of Swift Sport performance can be wrung out on a B-road, and it revels in it.

Such are the demands for more easily accessible performance (not to mention fewer emissions), that the Mk2 Swift Sport has since become a leftfield choice. Back in the Mk1 years, the 1.6-litre had 125hp, but it was peppy and chuckable. By the close of the Mk2’s life in 2017, the Swift Sport was still technically those things, but new expectations meant it was considered by many to be too slow.

That was palpably not accurate to anyone who'd taken the time to drive the door handles off one, but doubtless its modest output – and the less than scintillating reputation of its maker's badge – contributed to the Swift Sport’s relatively small sales in Britain. That, and the fact the new hybrid hatch costs £21,570. Earlier cars, of course, can be had for much less. And that doesn’t require you to consider high milers or scruffy examples, either, as proven by today’s Spotted.

This 2015 car has only 24,000 miles on the clock, and the exterior and interior both suggest an easy life from two owners. As far as we can make out, the alloys are mark free and the leather on the steering wheel looks nearly new. Yet thanks to the aforementioned Swift image and the fact a Mk2 Swift Sport was a sub-£14k car when new, the asking price of even this lovely example is £6,995. For a car that, objectively speaking at least, offers the same merits as Abarth’s new Scorpioneoro – and a fair bit more when push comes to shove – it's precisely the sort of outdated option we can all get onboard with.