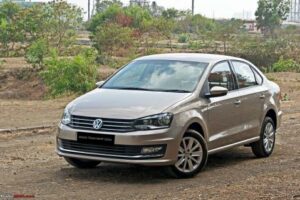 I loved the car’s suspension when it was new and it was comfortable and good when it came to handling. Now the suspension was so stiff overtime that it started giving me backaches.

BHPian Rahul_ recently shared this with other enthusiasts.

Problems with the suspension in my car:

My Vento TSI Highline+ is a June 2019 make/purchase and is currently completing 3 years and ~35k KMs. For the past one year I have been struggling with my car’s stiff suspension. I tried multiple things like reaching out to several ASCs and changing my tyres to Michelin P4STs. While the change of tyres helped for a bit but the problem went on to become worse.

All my service centre visits would turn futile as the staff would take a test drive and simply comment that it’s a sporty car and hence the suspension is supposed to be stiff. I loved the car’s suspension when it was new and it was comfortable and good when it came to handling. Now the suspension was so stiff overtime that it started giving me backaches and was extremely uncomfortable for my wife who was going through few medical treatments as well. The condition became so worse that I even started thinking that my car purchase was a mistake and I should sell it off – all this in just 2 years of purchase.

Upon reaching out to few helpful forum members here, I decided to take one more attempt to fix the suspension. I spoke to a contact in Hyderabad who who suggested that the cars from 2019 had issues with suspension and cars with as low as 19k run came to him with suspensions fully shot. I tried to co-ordinate a visit when he was in Bangalore, but given my wife’s appointments I couldn’t make it.

Finally, decided to reach out to a FNG close-by and got my suspension opened and checked (As the ASCs would outright say that suspension had no issues at all). Other observation apart from the harsh ride was that the car was scraping the road bumps which were it never did earlier and the strut mount had like a cm or more gap from the body when mounted (the bush was also gone).

After the struts were opened up, the local FNG informed that the struts were shot and indeed required a replacement. Given wife’s condition and running around hospitals I gave him a go ahead to change it. They were changed with compatible Monroe shocks as original ones would not be sold off counter and procuring from boodmo would take lot of time. It also meant spending money for repairs which should have ideally been covered under warranty. It was first time I realized that buying extended warranty and service package was a complete waste of money.

I saw the state of the struts that were replaced, the piston as getting pushed inside without much resistance and would not come out at all. However, there was no leakage.

Problem after the strut replacement was that the ride quality had gone for a toss and the car was showing a lot of body roll, so much that passing non-uniform undulations would cause lot of discomfort to wife. I reached out to the FNG again and they suggested putting silicon buffers which I did and the ride became better post that but still not as good. Plus there is sound coming in on bad roads which I suspect is from the steering rack.

Last weekend I reached out to Apple Auto in Whitefield and the service manager told me that they consider strut going bad only when they see leakage and piston going in easily and not coming out does not mean that the strut is faulty. I tried explaining increased scraping of the car as well to no benefit.

I am sharing the videos of the old and new strut piston being pushed:

I had a few questions:

Does only leaky strut mean that struts have gone bad ?

I got it checked at Hosur road and Whitefield service centres and the assistance provided by them was minimal and I am extremely unhappy with the service. Is there a better service centre or contact within that I should reach as I always feel that OEM products are usually the best and tested.

Should I press VW to cover the steering rack and suspension to be changed under warranty ? How should I proceed with this?

Here’s what BHPian vishy76 had to say on the matter:

My suggestion to you is to change the brand of struts and put Sachs branded dampers. The OE dampers are made by Gabriel, which are absolute garbage. They give up very early and even when in fine fettle, have a very poor ride and handling balance.

The steering rack could be included in the warranty replacement, but suspension cannot be. The fact that you have had the suspension replaced from an FNG might also allow VW to nullify your warranty. Here’s what my take is:

Put good quality Sachs dampers (these were OE on the Vento/Polo upto 2014 and performed very well. Excellent ride and handling + longevity). They don’t come cheap (around 22K for the entire set), but you will feel the difference for sure over Monroes or Gabriel’s.

A leaky strut generally doesn’t mean all of them have gone bad, especially on a low mileage car like yours. But as I said, Gabriel’s are pathetic quality components. You should go ahead and change to better dampers. VW OE parts are not always superior parts. This especially applies to the Polo and Vento. Lots of localization has taken place and quality of parts has deteriorated severely.

Here’s what BHPian Turbohead had to say on the matter:

There’s nothing to worry actually. Suspension and brakes warranty is only for 6 months. Please check your warranty papers to be doubly sure.

Are you sure the Monroe struts that were ordered were meant for the Vento? Do you have the old one in hand to cross check whether the part numbers are compatible with each other?

Shock absorbers externally look almost the same but the stiffness is usually controlled internally with different valves(? Not completely sure here). So it’s possible that your FNG may have ordered a part with the same size and travel but not necessarily designed for your car as the shock absorbers need to match with the spring rate.

It’s unlikely that they’ll take back the shock absorbers though if you want to exchange.