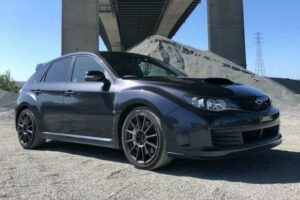 This very special Subaru has been enjoyed in Japan; now's your chance to carry that on in the UK

On the face of it, this Subaru Impreza STI R205 looks a little risky, at least by the standards of the hewn-from-granite German metal that often features here on a Monday morning. It’s an Impreza, first off; these were never cars designed for gently accruing miles at a motorway cruise. The keen among you will know that the R205 was a Japanese Domestic Market only car, too – therefore all the paperwork that comes with it is in Japanese. Which might be unhelpful. And it’s hardly like you’ll be ringing up the old dealer to verify service records…

But look at it the other way. The R205 was a limited edition (just 400 cars) Impreza hatch designed for the sort of people who might appreciate the benefits of STI-tuned springs and dampers, upgraded brakes and additional chassis bracing; exactly the kind of person, you would hope, that appreciates their car and looks after it properly. A regular STI hatch was there for those less bothered about the final tenth of dynamic performance. And even if it’s hard to make sense of the history, there is at least plenty there.

Furthermore, having gone to the effort of sourcing and shipping a car from Japan, it seems unlikely the selling dealer would have done all that to get a pup. We all like to say that condition counts for a lot more than mileage (111,000, in this case), and nowhere does that seem more apposite than here. STI R205 number 214 of 400 presents beautifully, with the condition of a car much more lightly used. There aren’t any interior pics for the advert just yet, but the outside is impressively free from any kind of blemish or imperfection. And don’t those wheels look fantastic?

Perhaps the most important thing, though, is the fact that there’s an R205 of any kind available to buy in Britain. Whether with 10,000 miles or 110,000, they’re worthy of attention. Just as the hatchback Impreza disappointed a lot of enthusiasts, this Japan-only special proved the STI spark was certainly still there. As a JDM car, the R205 used the stronger, more exciting 2.0-litre flat-four instead of the UK-spec 2.5, revving all the way to 8,000rpm. An entirely revised chassis, with almost no element of the suspension and brakes left untouched, made for a much more rewarding driver’s car. If the genesis of today’s hyper hatch was in the Impreza five-door, the R205 fully realised the potential years ahead of the cars like the A45 AMG. By all accounts it was a better effort than the Cosworth car that the UK did get soon after. “The best hatchback WRX STI to date” read one review. A low bar, you might say, but it seems the R205 impressed all who tried it.

With the world clamouring to get to Japanese Domestic Market specials at the moment, it should probably be no surprise that this R205 is for sale at more than £20,000 – having only cost a little more than £30,000 over a decade ago. The special stuff is being recognised, especially as it seems that nothing quite like the old hero cars will return. Consider this Impreza as an alternative for something like the Mk2 Focus RS – similar age, similarly rare, similarly driver focused – and £24k makes sense. The fact that STI saloon values seem to be climbing too, only helps the hatch’s case. As one of the last really special STI Subarus, a dedicated bunch will always have a special place for the R205, however many miles are on it. And if that doesn’t seal the deal, maybe the numberplate that’s available will – it’s R205 JDM…