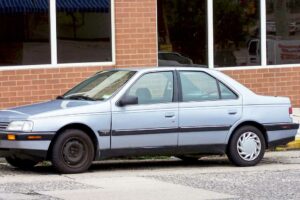 It doesn’t seem all that long ago that one could shop for compact Italian, French, Korean, American, Japanese, and German sedans—and actually have a few choices in each category. We don’t have to tell you which ones are left, even with domestic automakers having waved the white flag when it comes to smallish non-luxury sedans a while ago.

The choices in the late 1980s and early 1990s, however, were quite varied, and for a short period of time you actually had four French-engineered sedans from two automakers to choose from: two from Renault and two from Peugeot. (We won’t add the Citroën XM to this mix, as it was offered stateside somewhat unofficially, and only two dozen made it into the country at the time). These four faced uphill battles to capture some tiny slice of that pie, and all four quickly folded for quite different reasons.

Starting with the contenders from Renault, the Medallion that was inherited by Chrysler was rebadged as an Eagle and struggled along for a short period of time, deemed too difficult to sell. The Eagle Premier, designed by Renault but not sold under the Renault badge, was somewhat salvaged thanks in part to sales as a Dodge Monaco, keeping the seat warm for the LH cars that couldn’t arrive soon enough as far as Chrysler was concerned. The Peugeot 505, playing the role of the large sedan even though it wasn’t especially large by American standards, was now too old by the early 1990s, with Peugeot keeping the even larger (and more expensive) 605 out of the US. The Peugeot 405, on the other hand, was actually a new model, but it also just about the only thing on which Peugeot dealers could pin their hopes on as the new decade began. 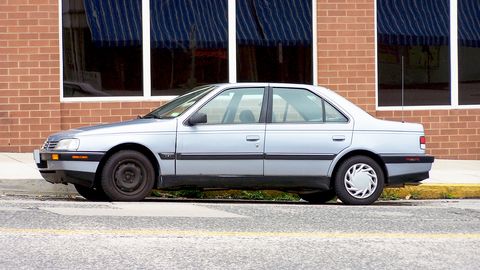 The 405 actually had a lot of things going for it, at least on paper. A sleek and modern design by Pininfarina, an ergonomic interior, engaging engines, and sharp front-wheel drive handling. In reviews of the day the model was compared very favorably to everything but the handful of players from Team Germany, which were also notably more expensive. Mercifully, Volvo did not have field a competitor to the 405 at the time (even though it had one with the Volvo 440), and its smallest offering was also its oldest, with the 240 being in a category by itself. But the 405 also had some competition from Saab to worry about.

“Within a compact overall length of 173.5 in. the 105.1″ wheelbase is some 2″ longer than the nearest competitor, giving a superior ride and extra passenger and luggage space,” ad copy of the time whispered. “The Peugeot-designed fully independent suspension uses modified MacPherson struts for the front suspension; low-intrusion trailing arm rear suspension with transverse torsion bars smooths out indifferent roads and maximizes the 16.6 cu.ft. of usable space in the carpeted boot.”

The 405 was also in the unenviable position of being forced to compete against cars that were priced either well below it, or well above it. Buyers were spoiled for choice in both directions, but in the lean, recession-flavored years it was difficult to end up staring at a decision tree where Peugeot 405 was the answer, unless you had bought just about all the previous models, and a Peugeot dealership was just about the only game in town. And in some cases it was the only game in town.

Of course, with the discounts being offered by Peugeot dealers at the time it certainly was possible to score a deal, unless you were after the 150-hp Mi16 model.

The car seen here, on the other hand, is a DL trim level powered by a 1.9-liter inline-four good for 110 hp, which was actually a decent amount of power if you looked at some of the competition at the time. 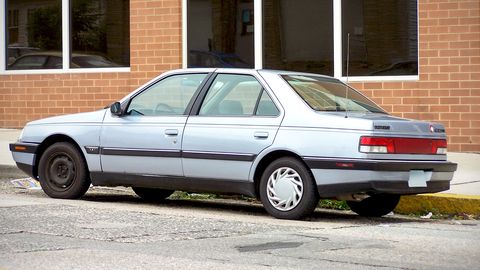 As modest as 405 sales were for a couple of years that it was present in the US, 405 wagon sales were even more dire, with about a thousand examples finding buyers in stateside before Peugeot pulled the plug. The 405 sedan went on to have a stellar career elsewhere, remaining in production outside of France for quite some time, almost into the present day.

Various post-mortems have cited the dealer network among the factors that contributed to the 405’s demise: Even by the late 1980s it was too small to support even a two-model lineup, with the other model being less than fresh by that point. Quite a similar thing was happening to Alfa Romeo dealers at the time, which struggled along with Milano sales but really relied on continuous GTV and Spider sales, until the arrival of the 164. But the Milano was a bit of a contrarian choice as well, and didn’t compare favorably to models from Japan that cost thousands less, with plenty of choices from Team Japan to choose from.

So the demise of Peugeot stateside, never being a big mystery of any sort, only seemed to reconfirm that once a lineup gets too small and a model gets squeezed by cheaper and pricier alternatives, the oddball tends to lose. Perhaps that’s a lesson that Alfa Romeo dealers know all too well.

The 405, on the other hand, remains a tremendous treat to find on the street today, and a reminder of a much more diverse compact sedan market.

Have you seen the Peugeot 405 on the road in the past decade? Let us know in the comments below.