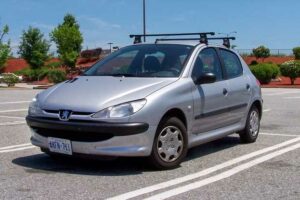 Peugeot was a hatchback juggernaut long before the 206 hatch arrived in 1998, replacing the 205 hatchback family that had been in production since 1983. That is really how long its predecessor ruled Europe and many other countries while remaining relevant, so the task of replacing it was not an easy one, even after so much time had passed. Wearing trendy ’90s styling and once again setting its sights on the Volkswagen Golf, the 206 was offered in three- and five-door hatchback flavors, as well as a sedan later on for a number of overseas markets.

The 206 is still a common sight all over the world, having spawned a whole lineage with production in 10 countries including China, Iran, and Chile, just to name a few. But it’s far from a common sight in the U.S.

Despite the Ontario plates this car was wearing when we spotted it, it wasn’t really a Canadian-market car, either, as it was never sold there, even though by now it would be eligible for hassle-free registration in Canada under the country’s 15-year-rule. Wearing European plates tucked in behind its Ontario plates, we’d guess that this was a non-diplomatic foreign national who was living as an expat in Ontario for a few years, and visiting the U.S. east coast from time to time. 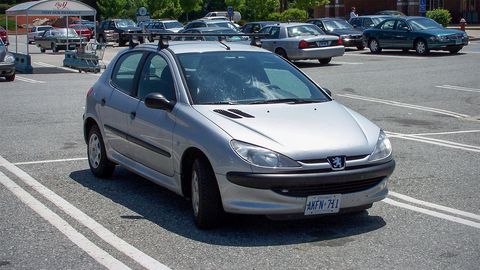 Given the fact that the 206 was built in so many countries, the lineup of engines this platform has seen has been quite extensive, ranging from a 1.0-liter inline-four gas engine at one end of the spectrum to a 2.0-liter gas engine at the other end, though in quite a few countries we suspect that it was the diesel version that made the most sense. Five-speed manuals were probably the way to go in most markets, but a four-speed automatic was also on the menu.

Reviews of the time were generally favorable: Despite plenty of body roll the 206 offered a comfortable ride, but was knocked for a weird seating position and somewhat cheap interior materials. In Europe the car was judged to be pretty sound mechanically, at least as the drivetrain was concerned, but it was bit let down by fizzy electrics. One really common gripe among reviewers were seat comfort and pedal positions. The 206 wasn’t especially quick unless you went for a GTi flavor from the later years, but then again, not that many middle-class European models were at the time, unless you wanted to spend a lot on some “rally” version.

Over 20 years after it came out, we have to admit that it still looks relatively modern—most people who hadn’t seen it before probably wouldn’t say it’s from the 1990s. We showed these photos to a few people unfamiliar with the model and with French cars in general, and most guessed that it had an age between 10 and 15 years. So for a design that’s over 20 years old, it has held up pretty well. 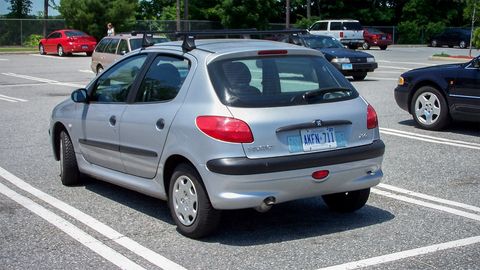 Curiously enough, Peugeot never offered its hatchbacks in the U.S. despite having a hit on its hands with the 205 starting in 1983. The 205 was the car that made Peugeot a serious hatchback force in Europe for decades, and the automaker followed it up with the 309 three- and five-door hatch in 1985, and then with the 106 hatchback in 1991. So it had no shortage of small cars to offer—but it just didn’t offer them in North America, preferring to battle Volvo and Saab with large sedans and station wagons. But with Peugeot 505 production having ended in 1991, it was down to the midsize (perhaps compact by North American standards) 405 sedan and wagon, which sold in tiny numbers starting in 1989 through the end of the company’s presence. Even after Peugeot left the U.S. in 1991, it still brought a small fleet of 406 sedans to the U.S. to test with some dealers and customers, hoping for a return that ultimately didn’t happen. The automaker even kept an office in New Jersey for years afterward, with some fresh manufacturer-plated cars, as well as a general counsel in New York City.

If you’re tempted by the French looks of the 206, the good news is that you only have about two years to wait until the first examples are importable into the U.S. via the not-particularly-gracious 25-year rule. The bad news is that a 25-year old 206 that’s clean and tidy is a bit of a tall order to find, but if we could make recommendation for sourcing one from any particular country, we’d say look in Holland. The mild weather and lack of sun or snow make Holland one of the best places to look for well-kept European cars of this vintage.

Have you seen any European-market cars in the U.S. lately? Let us know in the comments below.