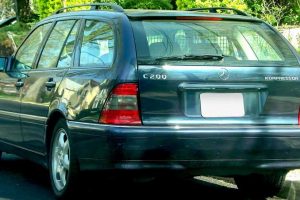 The W202 Mercedes-Benz C-Class is not a rare sight on this side of the Atlantic by any stretch, unless we’re talking about the wagon version from the 1990s. Mercedes didn’t offer the C-Class station wagon stateside until the next-gen model arrived in 2001, and then took the wagon away when the W204 C-Class arrived in 2007. Likewise, BMW kept the E30 and E36 3-Series station wagons out of the US in what was arguably a friendlier time for station wagons, only introducing it here when the E46 3-Series arrived.

So the US missed out on quite a lot of the smaller German wagonry in the 1980s and 1990s. And this makes the car seen in this photo quite possibly the sole W202 wagon in the US at the time, when we saw it on diplomat plates in Washington, D.C.

When it came to station wagons, Mercedes certainly had a hit on its hands with the W123 and W124 generations, which battled Volvo 700 and 900 series wagons along with the E34 5-Series. But Mercedes also kept most of its least expensive and smallest models out of the US, letting the E-Class serve as its sole wagon model for quite some time. The automaker was also protective of its status as a seller of luxury cars in the US, which is why we didn’t see any truly budget versions of its offerings here, including diesel versions of the C-Class sedan or the A-Class hatch that arrived in 1997.

Were Mercedes and BMW right to keep the C-Class and the 3-Series Touring out of the US in the 1990s?

That’s a difficult question to answer even with 25 years of hindsight. On one hand the smallish station wagons were more popular in the 1990s than at any later time. If anything, Mercedes should have brought the W202 wagon here and kept the W203 wagon out as SUVs became more popular. On the other hand, were small but luxury-priced station wagons a hit in the US in the 1990s? The W203 wagon, which did make it here, recorded pretty modest sales, which is why Mercedes then made the decision to keep the 2008 W204-generation wagon out of the states, as well as the next two generations.

What competitors would the W202 wagon have faced?

Among European brands in the 1990s there was the Saab 9-5 wagon, while Volvo offered the small V40 stateside—a model shared with Mitsubishi and produced in the Netherlands. Peugeot withdrew from the US at the start of the decade after selling barely a thousand examples of the 405 station wagon, so that’s hardly an endorsement of the premium, European station wagon segment at the time. VW offered the Passat wagon at the time, while Audi introduced the A4 Avant here by the middle of the decade, with both recording decent sales but were far from runaway hits. Volvo was clearly the overall medalist for variety with its 740, 960, 850, and V40 wagons during the decade.

In light of this, the W202 C-Class wagon and the E36 3-Series Touring would probably have not been huge hits here, and Mercedes was more than happy to sell people into the W124 and W210 wagons of the time. Odds were if a buyer was already in a Mercedes dealership looking for a station wagon, they could afford the next biggest size segment.

Just what does this C200 Kompressor have underhood?

For once the badge actually denotes displacement in a Mercedes model—the C200 Kompressor had a supercharged 2.0-liter inline-four underhood good for 178 hp. But you may also recall that the C200 Kompressor sedan was not offered here, with the smallest engine in the C-Class sedan being the 2.3-liter in the C230. Neither were the diesels.

If you feel a strange desire to own a W202 wagon, we have some good news: 2021 is the first year that you’ll be able to import one via the 25-year rule; 1996 was the first production year of the longroof. Finding one in tidy condition could be a challenge, but we’ve seen some clean and unrusted LHD examples in Belgium and the Netherlands.

Should Mercedes have offered the W202 wagon here at the time? Let us know in the comments below.