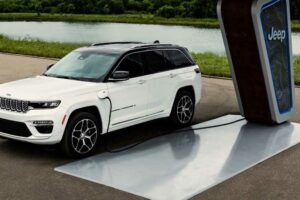 After Toyota announced its commitment to build batteries in the U.S. Monday morning, Stellantis has now announced it’s investing in a stateside factory to power all its upcoming electric Jeeps, Rams, Dodges, and whatever is going on with Maserati, too.

It’s not doing it alone, however. Stellantis is establishing a joint venture with LG to make battery cells and modules in North America, similar to how GM has set up its Ultium production—also in partnership with LG. The plant’s set to be operational by the first quarter of 2024 and to have an annual production capacity of 40 gigawatt hours.

LG is in on quite a lot of automakers’ battery production plans, including GM’s new research facilities, despite the fact LG might have to pay GM $1.9 billion in compensation for the Bolt packs that might catch fire.

Stellantis’ electrification plans include $30 billion in investments through to 2025 to accelerate towards the oddly unambitious target of 40 percent of U.S. sales being hybrid or electric cars by 2030—as well as really awful slogans. By then, it also wants to have 260 gigawatt hours of annual battery production, for which this plant will lay a solid foundation.

The site for the plant hasn’t been picked yet and there’s still some legal wrangling to be done between Stellantis and LG, but work’s expected to start in the first quarter of 2022.

Want to get in touch with me? [email protected]