Steal or no steal | Trackday hatches 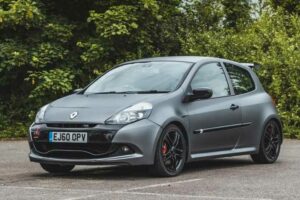 Keen to buy something honed for circuit work, but don't want to pay the earth? Step this way…

Even in the current, maddening used market, road-legal track cars look like canny buys for those happy with harnesses. Have somebody else spend money on expensive parts to make it better to drive, then you swoop in for something barely more expensive than standard – but much more exciting. Yes, it’ll be harder to sell on than an untouched example – and obviously it’ll have been thrashed – but it remains a tempting compromise.

Renaultsport hot hatches have made great bases from which to build track cars over the years: great to drive, pretty tough once a few weak spots are addressed, and with a host of aftermarket upgrades to choose from. No wonder paddocks nationwide are full of them.

This Clio 200 is the perfect example of what I’m on about. £10k isn’t much more than would be paid for a standard car with fewer than 60,000 miles, yet this one gets bucket seats, a cage, Gaz suspension and a limited-slip diff. It’s had the expensive gearbox rebuild these 200s need as well, plus a recent cambelt. It won’t win any awards for originality (not least with a replacement engine), but this Clio does promise to be huge fun – and that’s more important.

Who remembers the old Honda Civic touring car that raced in the BTCC during the mid-2000s? Granted, after the golden era of Super Touring ended there weren’t that many memorable cars, but it was hard to ignore the Team Dynamics-run red and black bread van with a massive wing on the back.

Well, I can’t be the only one who remembers it fondly because the former owner of this CTR has made some, er, substantial modifications seemingly inspired by a racing car once sponsored by Lego Star Wars. The car has been completely gutted, with the only recognisable bits from its pedestrian past being the dash-mounted gear lever and white dials. It still has Recaros, only the signature red seats have been swapped out for buckets with Sabelt harnesses, and it’s all topped off with a full roll-cage – as a proper track car should.

Power from the revvy 2.0-litre VTEC is almost unchanged at 200hp, though there’s lots of carbon fibre bodywork to keep weight low. No wonder it costs £19,991 – although, crucially, it seems like it’s been put together by someone who knows what they’re doing. Besides, you can hardly go wrong with an EP3 as your canvas.

Okay, I am on record as saying I didn’t like the old BMW 1 Series, but stop throwing rotten tomatoes at your screen – you’ll break it. This isn’t an about turn. Let me explain. For a start, I was talking about the F20/ F22 when casting doubt on its handling prowess, and I felt somewhat justified by one of the disgruntled comments that said, something along the lines of, ‘My F22 was brilliant. The stock rear dampers were poor but aftermarket suspension sorts that.’ No further questions, your honour.

This is a different kettle of kippers. It’s an E87 1 Series and the ‘prominent car collector and racer’ who made it did put aftermarket suspension on it. It’s now got Bilstein B16 coilovers, along with H&R roll bars and bushes, which should keep it nicely settled. There’s a lot more to it than that, mind. It’s also got uprated brakes, a half cage, lighter wheels and the diff from a 130i auto – apparently the ratio is more suited for tack use. It isn’t an auto, though. This one’s a manual, with a beefier clutch and lightened flywheel to make the 3.0-litre six spin sweeter.

Obviously, a six-cylinder stripped-out track car with rear-wheel drive is a fine formula from the off. But what was the thing that really hit the spot for me? Those vents. Come on people, are they ventastic or what?