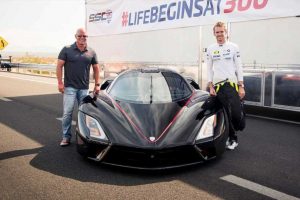 And invited Shmee and the other guys who raised questions to witness the rerun.

To say that the previous week was a hectic and stressful one for SSC North America would be an understatement. It would have been great – if only the SSC Tuatara’s top speed run video (see below) was clean and spotless.

As it turned out, there were aspects in the video that prompted Shmee and other personalities to question its validity. SSC released a statement acknowledging the allegations of inconsistencies further stating that the issue was actually with the video editing. They promised to rectify the issue and come back with a suitable response.

We now have an answer and it came straight from the founder of SSC North America, Jerod Shelby. In a video uploaded by FastCarCommunity on YouTube (embedded on top of this age), Shelby released a personal statement, recalling what has transpired after the controversy.

In line with this, Shelby announced that they are doing a rerun of the SSC Tuatara’s top-speed record attempt.

“So as I sat there thinking through, there was just no way to now make this perfect. It hit me. We have to rerun the record. We have to do this again and do it in a way that it’s undeniable and irrefutable. So the next time we do this, which is we’re going to prepare to do it in the very near future, we need to make sure we have multiple GPS companies, equipment in the car. I want to make sure that we have their staff on site looking over our shoulders and analyzing every run, every detail of this,” he said on the video.

Moreover, Shelby has extended a special invitation to Shmee and the other guys who raised questions about the validity of the record-setting run.

“I’d like you to be looking over our shoulder and verifying so that you can tell the world and the car community that you also are in all over what this car is capable of,” he added.

The details of the Tuatara’s top-speed record rerun are yet to be announced by SSC, along with the response to the special invitation. We expect to hear from SSC again in the next few days, and we’ll make sure to be on top of that as we always do.