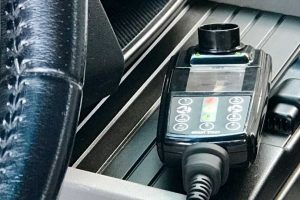 Sidelined in the Spring by measures to counter the COVID-19 pandemic, sports leagues across the world have since sought ways to make competing safe again. In Formula 1, this meant cloistered paddocks, virus testing every four days, and until recently, no spectators. Down in the comparatively low-budget English Football League One, however, Oxford United Football Club has to make do with an aggressively sanitized team coach bus. So aggressively sanitized, in fact, that alcohol fumes tripped the vehicle’s breathalyzer ignition interlock, forcing the team to find another ride to an impending game.

“The problem is the blowing machine got affected by the alcohol gel on the coach [bus], which meant when he [the driver] blew into it the coach stalled and wouldn’t start for six hours,” explained Oxford United FC head coach Karl Robinson to Oxford Mail.

Robinson told press his players had to change into their uniforms at the hotel, then scramble to find transport to their game. “We had to use staff cars, taxis, you name it to get to the [sporting] ground.”

Court-mandated installation of such a device is legal in all 50 U.S. states, though activist groups have pressured automakers to introduce them as standard equipment on all new vehicles. Should promises of THC-sensitive breathalyzers ever materialize, expect those too to become part of efforts to curb intoxicated driving.