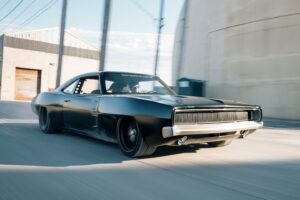 Called "Hellacious", it's the road-going version of the latest Fast & Furious special

SpeedKore’s “Hellacious” Dodge Charger is the F-word in car form – by that, of course, we mean Fast. Or maybe Furious. Indeed, anyone who’s preparing the hand sanitiser and haz-mat suits ready to return to their local germ-infested popcorn centre may well be aware of the latest churn of the Fast & Furious franchise, known simply as F9. Or, actually, F9: The Fast Saga, but then we have to ask where the furiousness is.

Custom car builder SpeedKore, which has worked with the franchise since the Dodge Charger “Tantrum” featured in Furious 7, was once again tasked with creating the movie’s centrepiece. Now, it’s followed up with the road-going version, this time a 1968 Dodge Charger dubbed “Hellacious”.

Ready for the stats? Of course you are. There’s a 6.2-litre Hellcat V8 engine, mounted between the rear axles (!) on a custom-built SpeedKore-created frame, kicking out 707hp and 650lb ft of torque. High-performance intercoolers feed cool air to the 2.4-litre supercharger.

The Hellacious Charger is rendered from full carbon fibre with a glass rear to let you drool over the engine compartment. It’s not every day – if ever, come to think of it – that you see a Charger with an engine in the middle, so why not show it off? Inside, it’s stripped back with harnesses and low-back racing seats.

“This Charger is one of our most extreme builds to date,” said Jim Kacmarcik, president and owner of SpeedKore. “We wanted to bring the movie magic of F9 to life. Hellacious is a road-going version of the movie car with the functionality of a purpose-built performance car. Hellacious is yet another unique representation of our design and engineering capabilities as a custom car builder.” F9 is out now, by the way.