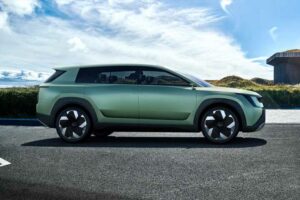 Seven-seat EV concept is family-focused, but there could be a bit more power already on the horizon

There’s plenty going on in and around the boxy shape of the Skoda Vision 7S concept car. Most notably a new design language that’ll be applied to all fully electric Skodas. Plus a new badge that heralds a rebranding with billions of euros behind it. Ultimately, though, you’re looking at the Czech company’s new halo car – a seven-seat SUV that’ll sit a size and class above the Kodiaq when it makes production in four years.

And it looks like there’ll be a vRS version. “A dad or mum wants to drive something sporty – at least I do!” says Skoda product strategy man Björn Kröll. “This car may be about family but that doesn’t mean you want to have a boring life as well.”

Indeed, the vRS performance arm hasn’t just survived Skoda’s rationality-focused rebranding, it looks like it might well flourish too, working with both EVs and internal combustion cars. A new Superb and Kodiaq come in 2023, while the Octavia gets a big refresh a year later; all three will retain traditional engines for some time yet.

“We don’t think that moving towards e-mobility excludes vRS,” noted Kröll. “Instant torque, acceleration like hell – that is the vRS design assets. There will still be ICE-powered vRS too, of course. The transformation ahead of us doesn’t mean we can’t offer ICE cars. The transformation will happen at different speeds in different countries. In some areas we’ll be selling 100 per cent electric cars by 2030, but there are others where it might be 60 [Skoda’s target is 70 per cent by 2030]. So it’s important we have flexibility – it’s the same for lots of companies.”

Motorsport still features, as well. Skoda says it’ll get stuck into electric racing once the world of rallying properly incorporates EVs. The Vision 7S you see here arrives in 2026 as the third of a trio of all-new Skoda electric cars, with the second being a Fabia-sized car that would surely host a cage and co-driver very nicely indeed. The first – but of course – is a compact SUV.

As for the 7S itself, the stats are thin on the ground. One glance at its pillarless doors and wild interior should tell you straight away that it’s still a little way from production. But we know it sits on the VW Group’s MEB platform, hooked up to an 89kWh battery and 200kW charging capability for a range of around 370 miles. There are no power or torque figures, but for reference the current Enyaq vRS links a 77kWh battery to 295hp peak power and a 6.5sec 0-62mph time. So there might be a smidge more power here to account for its extra length and mass.

Skoda is aiming to differentiate itself more from its VW cousins and the design language you see previewed here – curiously dubbed ‘modern solid’ – is its clear-cut way of doing it. There are some recognisable cues from existing models around the front lights, but venture around the rest of the car and it really does begin to look like something new. Albeit one that shouldn’t leave too much of Skoda’s recent heritage behind just yet…