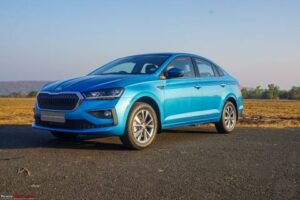 The Skoda Slavia shares its underpinnings with the Kushaq as well as VW’s Virtus and Taigun.

Skoda has announced that it has received over 10,000 bookings for the Slavia within one month of its launch.

Skoda opened bookings for the Slavia back on November 18, however, prices for the new mid-size sedan were announced on February 28, 2022.

The Skoda Slavia is based on the MQB-A0-IN platform, which it shares with the Kushaq. It is available with two engine options, including a 1.0-litre turbo-petrol engine producing 113 BHP and 178 Nm and a 1.5-litre turbo-petrol unit with 148 BHP and 250 Nm. Transmission options include a 6-speed manual, 6-speed automatic and 7-speed DSG.

Volkswagen is expected to announce the prices of its new mid-size sedan, the Virtus, later this month.