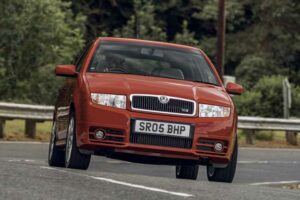 The turbodiesel trailblazer is now almost 20 years old – has time been kind to it?

If the phrase had existed back then, Skoda in the early 2000s might just have claimed the energy of a start-up. Yes, the brand had been around for a very long time and the VW money had been flowing for a while – but Skoda was only just beginning to upset the establishment in a way that’s become all too familiar. Buoyed by the success of the early Octavia and Fabia, the manufacturer channeled its newfound confidence into performance variants of both. The 180hp Octavia vRS arrived in 2001, making the Golf GTI look a bit silly in the process, followed a couple of years later by this, the Fabia vRS.

It shook up the market by offering something that hadn’t been offered before, the 1.9-litre TDI unit reflecting diesel’s increasingly popularity, but also Skoda’s faith in doing things a bit differently. In a segment that included the SportKa, Mini Cooper and Citroen C2 VTS, its 130hp and 229lb ft were mighty figures. Rivals may have been lighter, nimbler, and blessed with similar power output, but the Skoda’s enormous turbo torque ensured incredible performance with very little effort.

That the vRS also modestly yet stylishly improved the Fabia’s look and still offered great value – £12,380 was more than £2k less than a Polo with the same engine – won it even greater acclaim. Let’s not forget that 2003 was the year that saw VW’s V10 TDI emerge, and Alfa selling five-cylinder JTDs, and BMW’s remarkable twin-turbo, straight-six 535d was just around the corner. In the same way that now every week seems to see a different plug-in hybrid launch, so the early 2000s were characterised by a plethora of boastful diesel models. The vRS was the ideal fit for its time.

The combination of low price and high performance meant a cult following swiftly developed during its four years on sale. A Limited Edition signed off the diesel vRS in 2006-2007 (and is collectible nowadays), only for Skoda to completely change tack with the next fast Fabia. Out went the diesel to be replaced by a supercharged and turbocharged 1.4-litre petrol, plus a mandatory DSG. For an assortment of reasons, that didn’t prove so popular. And with no sign of another vRS Fabia in sight, let alone a diesel one, the original remains unique.

For a basic shape launched more than 20 years ago, the Fabia still looks good. Not as edgy or as attention grabbing as modern taste would dictate, but well proportioned and handsome. What was criticised at the time for being too modest a makeover actually looks nicely judged today, with the larger alloy wheels and green calipers just about sufficient to mark it out. The interior is similar; it’s fairly basic – check out the blank switches – but done well, still feeling solid. Which is infinitely preferable to showy, illogical, and poorly assembled, especially when even the youngest cars are now nearly 15 years old.

The vRS starts with a clatter – this isn’t a whisper-quiet diesel by any stretch of the imagination. It does improve as the engine warms through, however, and there’s a lot to like about the 1.9-litre unit despite a rather agricultural introduction. While there’s the clear appeal as a used prospect around great durability and decent fuel economy – the car’s obvious selling point at the time – it’s also worth bearing in mind how fast the Fabia still feels. Peak torque is made at just 2,000rpm, which means the vRS is shoved along hard from very few revs, the mid-range still seeming strong even by modern standards. It tails off beyond 4,000rpm, but not until surprising you with gutsy, determined performance through that gear. A fairly slick five-speed manual, and sensibly spaced ratios, add to the experience; maybe you won’t be chasing the redline in every single gear, but there’s fun to be had in selecting a ratio higher than you normally might and feeling the burly performance build and build. These old PD diesels are easily tuneable, too.

The vRS doesn’t handle badly, either. Clearly it’s not a Renault Sport Clio, with a balance led by the big lump up front, but the steering has the natural feel that hydraulic systems often show up in newer electric racks, and good grip as well. With the easy-access torque on tap, the Fabia vRS is a simple car in which to carry a good amount of speed. The brakes seem up to task, too. That said, it’s easy to overwhelm a front axle burdened not just with healthy torque but weight, too. An overambitious entry speed or premature throttle application will see it wash out, with not much to be done about it but to cool your boots. Go buy a 182 if outright finesse is your bag – but they won’t be as cheap as the Skoda…

Value really counts in the Fabia’s favour now, just as it did all those years ago as a new car. The durability of the vRS and its suitability for just about every journey is borne out by the amount for sale with chunky six-figure mileages – they are the norm rather than the exception. The suitability for tuning means there aren’t many standard cars around, but they do come up – from just £2,000 as well. Somewhere nearer £4k buys one with fewer than 100,000 miles. If the cambelt and water pump haven’t been done recently, factor that into your offer, as it’s a substantial and important job.

There’s also the elephant in the room to consider: the Fabia’s old school diesel engine. In just a couple of months’ time it’ll cost £12.50 a day to drive a car like this in a large chunk of London, from Putney to Walthamstow and Acton to East Ham. However much you love your £3k Skoda, that’s going to be hard to justify if it’s a regular occurence. And a low emission zone that penalises diesels seems unlikely to stop at London.

But for those outside of the capital and large cities, the Fabia vRS remains as recommendable as ever. It’s cheap to buy and shouldn’t cost a lot to run, fast as standard and very easily made quicker, and decent to drive with affordable improvements out there. Diesel has never been for everyone, leave alone in 2021, yet seldom has it seemed more appealing than when powering the quirky little Skoda.