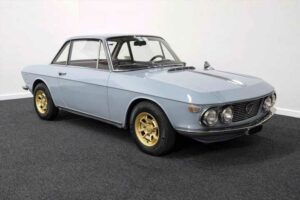 Want an Italian classic – a Lancia, no less – that doesn't cost the earth? Try a Fulvia

Nobody needs reminding that certain old Lancias are now tremendously expensive. It’s easy to see why: the resurgence of brand awareness through projects like the MAT Stratos, Kimera EV037 and Automobili Amos Futurista has ensured a renewed appreciation of what Lancia achieved decades ago. Cars that were revered already are set to become even more sought after as originals of the breed. Combine that with the uncertainty surrounding Lancia under Stellantis and the conditions are perfect for pricey adulation.

It’s nearly 30 years since the Delta Integrale won its last WRC, 40 since the 037 was the last RWD car to triumph in the championship and approaching 50 since the Stratos was introduced. These are all really old cars now, and increasingly difficult to get old of. The last Stratos we wrote about was half a million. Want proof of the influence of #MakeLanciaGreatAgain? This Beta Montecarlo is almost £25,000, with electrics still to be sorted out…

However, there is hope for despondent Lancia fans, those after a car from the glory days without having to remortgage a house for it. This Fulvia is one of the cheapest classic Lancias on PH (we’ll ignore the £3k Ypsilon) yet looks a real gem, having been brought to the UK five years seemingly and cherished ever since.

Doesn’t it look superb? As an early (1967) Series 1 Fulvia Coupe, it’s arguably the prettiest of the lot, and has the added appeal of being a pre-Fiat car as well. And while it goes without the homologation appeal of an HF, this car’s 1.2 V4 should only be a few horsepower down on that car. And don’t expect to pay £25k for any Lancia with the High-Fidelity badge on it…

Alright, that money means ‘one of the cheapest Lancias’ isn’t bargain basement affordable – and this will surely be more than the Fulvia was a few years ago – but it’s hard to deny the value compared to its more famous siblings. This is still a very pretty, rare Lancia that enjoyed incredible rally success; yes, it’s front-wheel drive and not all that fast, but have you seen what a Delta, Stratos or Aurelia costs these days? That the Fulvia is one of the most cost-effective ways into a Lancia is great news, of course; that it’s one of the icons is surely even more heartening.

Though the advert suggests this might be a wise investment buy – always a risky strategy – it also says the Fulvia could be bought just for fun. That sounds a much brighter idea. With 55,000 miles recorded in more than half a century, a rot-free chassis and a recent MOT, there should be nothing in the way of many more days happy Lancia motoring. And so what if it isn’t worth quite Stratos money anytime soon? More reason to continue driving it…