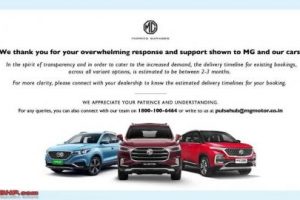 The delivery timeline for existing bookings across all variants is estimated to be between 2-3 months.

MG Motor India has been hit by the ongoing semiconductor shortage and as a result deliveries of new cars have been delayed.

The carmaker has announced that the delivery timeline for existing bookings across all variants is estimated to be between 2-3 months. Customers have been requested to connect with their local dealership to know the estimated delivery timelines for their bookings.

MG currently has four models in its line-up. These include the Hector, Hector Plus, Gloster and the ZS EV. The semiconductor shortage is said to have affected both the locally produced as well as completely knocked down (CKD) models.

Thanks to BHPian TorqueIndia for sharing this with other enthusiasts!