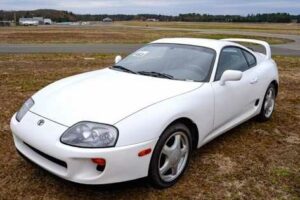 Would you be able to look past a car’s previous criminal history if it meant getting the keys to your dream sports car? If so, this incredible auction of rare dream rides may be of interest to you.

A total of 27 well-maintained late 90s and early 2000s vehicles are being offered by auctioneers Stanley J. Paine, all of which were seized by the Massachusetts police department following the arrest of the collection’s former owner. Some highlights include a whopping 13 Mk IV Toyota Supras, two Mitsubishi Lancer Evos, and five E46 BMW M3s.

The jewel of this incredible collection is an unmodified Toyota Supra fitted with a manual gearbox and just 8,169 miles listed on the clock. At the time of writing, the white Supra has reached $130,000 (£105,085.50) on the online auction, though it could go for much more considering the vehicle’s rarity and outstanding condition.

Police seized the collection from an alleged drug trafficker, who was allegedly found with 138 pounds of marijuana and a set of knuckledusters in his van during a traffic stop. A subsequent raid of the suspects’ storage facility revealed a hoard of weapons, drugs, millions of dollars in cash and, of course, the impeccable collection of the late 90s and early 2000s sports cars. As a result, these desirable machines are now being offered to the public and will be sold to the highest bidder.

The complete list of cars featuring in the auction includes:

The Supras, in particular, are likely to attract the most attention, with the majority being unmodified and in excellent visual condition. Of the Supra collection, eight feature the highly-desirable manual stick and ten have covered less than 50,000 miles.

The auction is set to end on June 4, so you’ll have a bit of time to save up if one of these former crook mobiles takes your fancy. Would these cars’ former past deter you?