Home » Auto News » Second in Line: This Classic Aston Martin Is the Number Two of DB4s 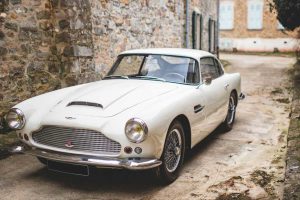 The highest echelons of car collecting remain a very silly place to poke around. Take this outrageously beautiful 1958 Aston Martin DB4 that’s currently available through RM Sotheby’s Private Sales division. Ninety-nine percent of us are sold on the very idea of owning an Aston Martin—any Aston Martin would be fine. The next step above us moneyless proles ask, “Yeah, but what kind of Aston?” The one percent go a bit deeper with an, “A DB4? And?” followed closely by the collectors in the 0.1 percent pushing one step further: “An early DB4 you say? Hmmm. I don’t know … I already have DB5 production number 12, and DB6 number 19 …”

Alright, Captain Snooty. This is the second DB4 ever built, the first shown to the public, the first in left-hand drive, one of just 50 total DB4 Series 1s, and it comes with a numbers-matching engine and transmission. How’s that for a dossier?

That’s right—DB4 numero dos. According to RM Sothebys, Aston lent this coupe to Paris dealer Garage Mirabeau for a private showing right before the car’s official unveiling at that year’s Paris Auto Show. The all-new Aston was a stunning leap forward for the high-end British automaker; engineering powerhouse Tadek Marek’s new 3.7-liter inline-six pushed out a contemporaneously impressive 240 hp and matching 240 lb-ft of torque through a four-speed manual transmission with overdrive.

This blend of intoxicating style and strong performance led to record-setting sales for the brand; when production switched to the DB5 in 1964, 1,204 DB4s had left the factory. These were fabulously usable cars, so it’s no surprise that even this ultra-early production DB4 enjoyed regular use after it returned to Garage Mirabeau for official sale in 1959. By 1987, the car wore burgundy paint and carried an impressive 104,000 miles on its odometer. The DB4 changed hands that year and remained with its new owner until 2016. During this time, the car was repainted to its original Desert White spec.

So, if this rarer-than-rare 1958 Aston Martin DB4 meets your exacting specifications, RM Sotheby’s would love to put your butt in the cushy driver’s seat—provided you can swing whatever the down payment is on the asking price of around $1.2 million at current exchange rates. Save those pennies.