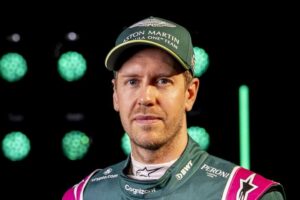 Germany’s famous speed-limitless highway network, the Autobahn, is slowly losing favor with even the country’s most enthusiastic drivers. In January 2020, the influential Allgemeiner Deutscher Automobil-Club (ADAC) dropped its opposition to speed limits, and now, another surprising ally has joined in: Four-time Formula One champion Sebastian Vettel.

Speaking with Auto Motor und Sport, the Aston Martin F1 driver advocated for putting aside personal desires and acknowledging that a speed-limited Autobahn would be a safer one, not to mention one with a diminished environmental impact.

“It’s not about personal feelings. You have to look at the big picture. A speed limit would save almost two million tons of CO2 emissions,” Vettel told the outlet in an interview translated from German. “There are accidents in Germany that only happen because we don’t have a speed limit. If you only save the life of one person, then that’s a no-brainer for me.”

The idea of giving up one’s liberty to drive without regard for speed limits will make little sense to people whose notion of the Autobahn is more romantic than realistic. Large portions of Germany’s highway network actually have speed limits already, and those that don’t are often too heavily trafficked to reach—let alone sustain—high speeds anyway. Also, because driving flat-out isn’t exactly great on gas, most Germans don’t actually drive that way. Relinquishing the freedom to drive at any speed, then, would not actually affect many Germans since it’s a privilege they already give up any time they go abroad.

“I don’t suddenly feel unfree when I travel to other countries such as Turkey, the U.S.A. or Great Britain and drive there,” Vettel continued. “It is not a question about a freedom, but only about something that people have gotten used to. At some point, the speed limit will come anyway—whether it is now or in a few years. I have no problem with free driving disappearing. Whoever step[s] on the gas want[s] to do it where it is safe. In this case, that would be the race track. You can test your limits there without endangering others.”