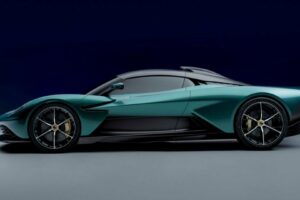 Starting at about $800,000, Aston Martin’s new Valhalla will be the brand’s first mid-engine supercar since the ill-fated Bulldog some 40 years ago. Lest we forgot, the Bulldog–Aston Martin’s angular wedge-shaped mid-engine car–was a one-off supercar ahead of its time. Looking like a predecessor of the DMC DeLorean, the Bulldog was all but a whisper in history until it was restored earlier this year. Now with the Valhalla, Aston Martin hasn’t given up on its mid-engine dreams.

The sleek Valhalla, dubbed “Son of Valkyrie” because of its shared technologies with its track-ready papa, is a result of a collaboration between Aston Martin and Red Bull Racing. Initially called AM-RB 003 internally, it became Valhalla with the same naming convention as the other Aston Martin “V” cars. Two of those (Vulcan and Vantage GT12) were shepherded by Aston Martin’s Chief Creative Officer Marek Reichman, a 16-year veteran of the brand. While his specialty is design, his eye for aerodynamics and engineering is unmistakable on the Valhalla. 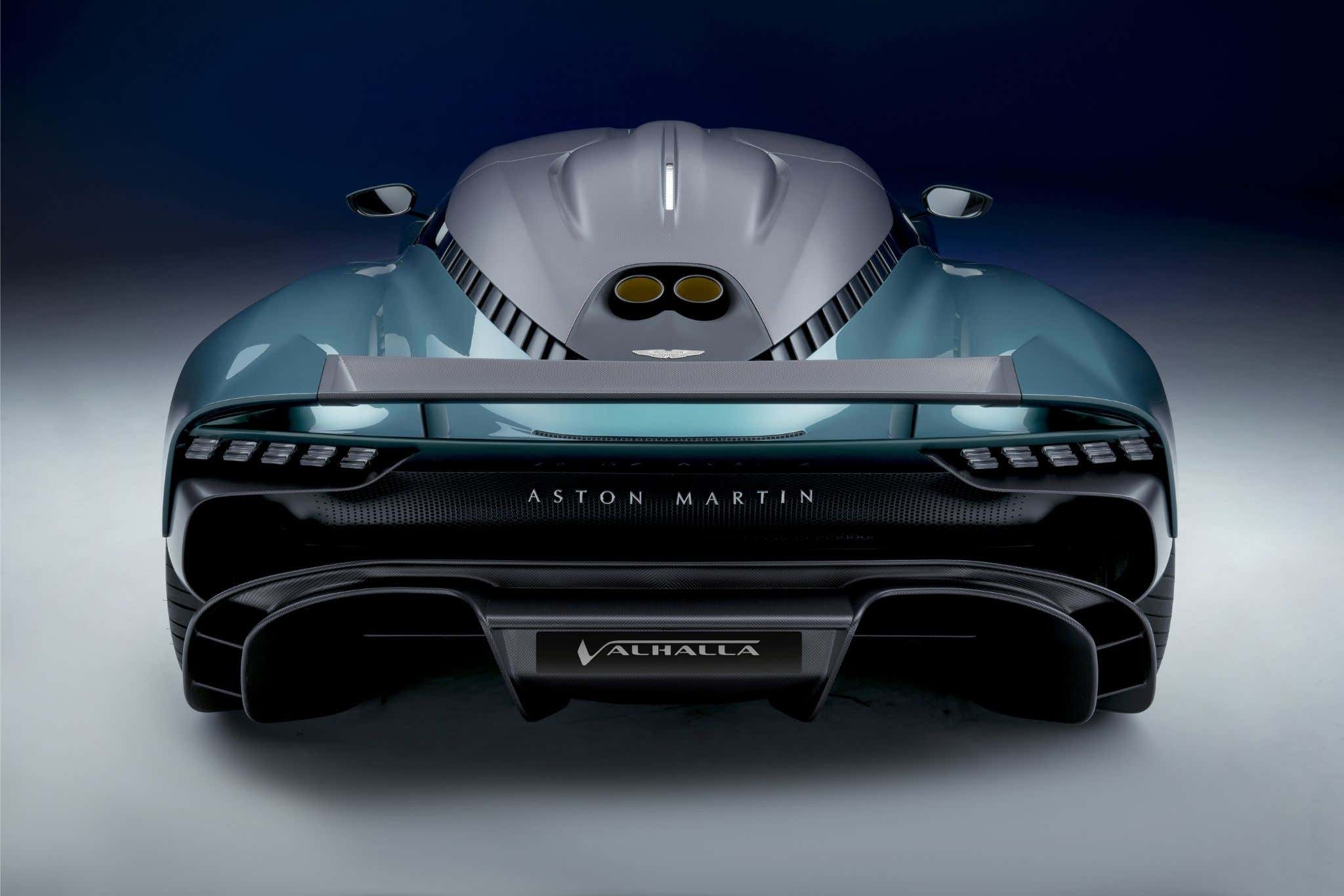 Reichman told The Drive during a one-to-one interview in Austin that the Valkryie set the tone for the current understanding and language of aerodynamics for Aston Martin. They don’t have to rush through it, either: in 108 years, the brand has built only 100,000 cars and each one is assiduously crafted. By way of comparison, Toyota produced two million cars in 2020 in the U.S. alone

“I enjoy the interplay between the science, the engineering, the aerodynamic suggestion, and the kind of aesthetic answer to that suggestion,” Reichman says. “An aerodynamicist sees one solution, and they’ll say to me when we’re developing it, ‘I need a big hole on the side of the car for cooling.’ And I’d say, ‘Well, it could also be this shape, can’t it?’ As long as I’m not interfering with the volume of air they need and I can prove the principle still works, we get the aesthetics of a sports car or a racing car. That’s the marriage of engineering and design.”

The Valhalla is powered by a Mercedes-AMG-sourced 4.0-liter twin-turbo V8 (after abandoning its original planned V6) mated to three electric motors for a total of nearly 1,000 horsepower. This supercar is going to be ridiculously fast. It rides on a dedicated tire system from Michelin with rubber wrapped around 21-inch wheels in the back and 20-inch wheels in the front, inspired again by the rake of a Valkyrie and F1 cars in general. With that kind of brawn, the science of downforce is critical to keep the Valhalla from flying away into space instead of gripping the road here on Earth.

“We’re saying it’s going to get a six-minute, thirty-second lap time at the Nürburgring, which puts it best in class,” Reichman says.

You’ll recognize the sculpted Valhalla as an Aston Martin, topped off with a wing section that along with the lower splitter gives a biplane feel to the design (with inverted physics to match). Combining form with function, the double wing helps remove all of the high-pressure air from the front of the car, contributing to the downforce of the front and preventing lift. 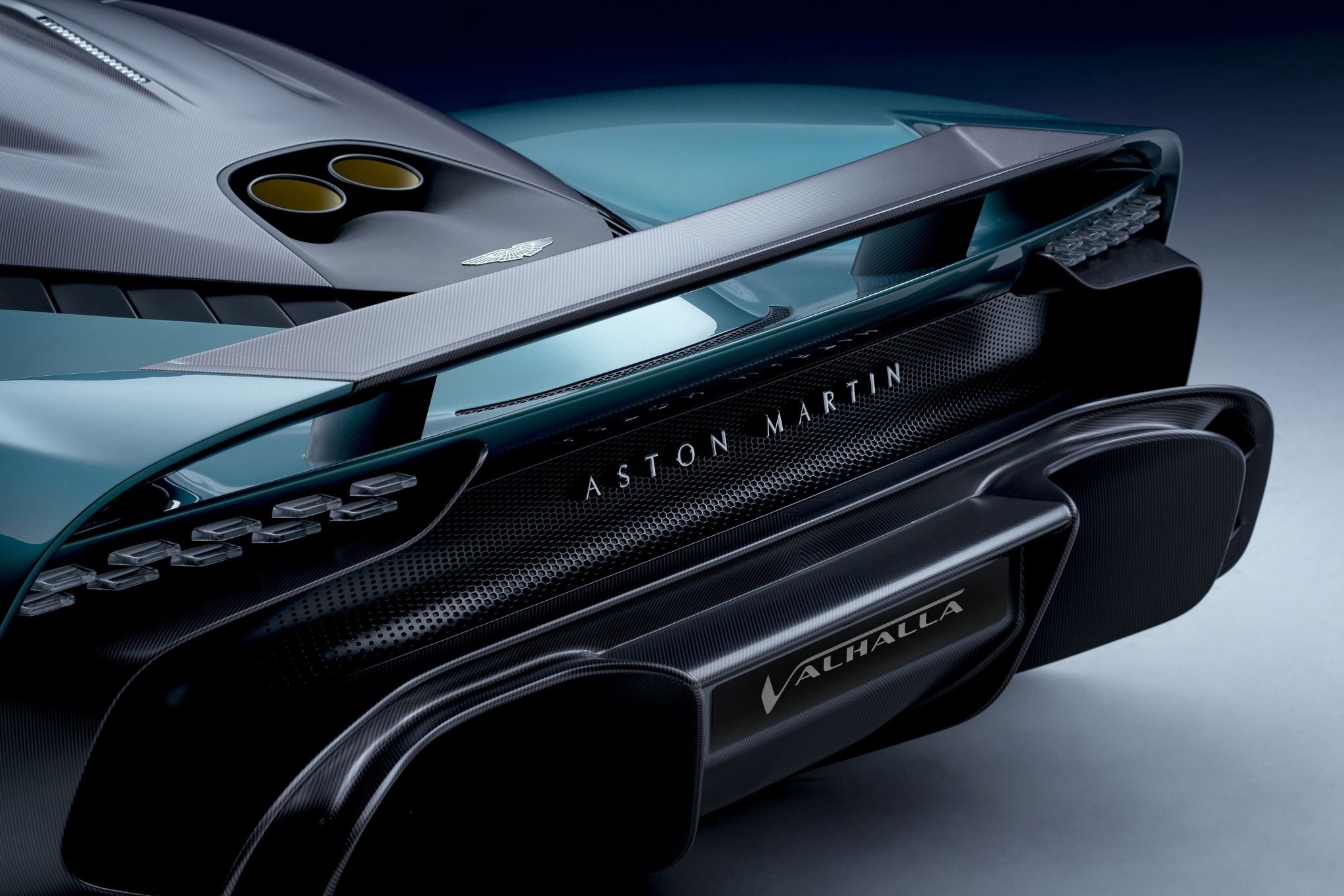 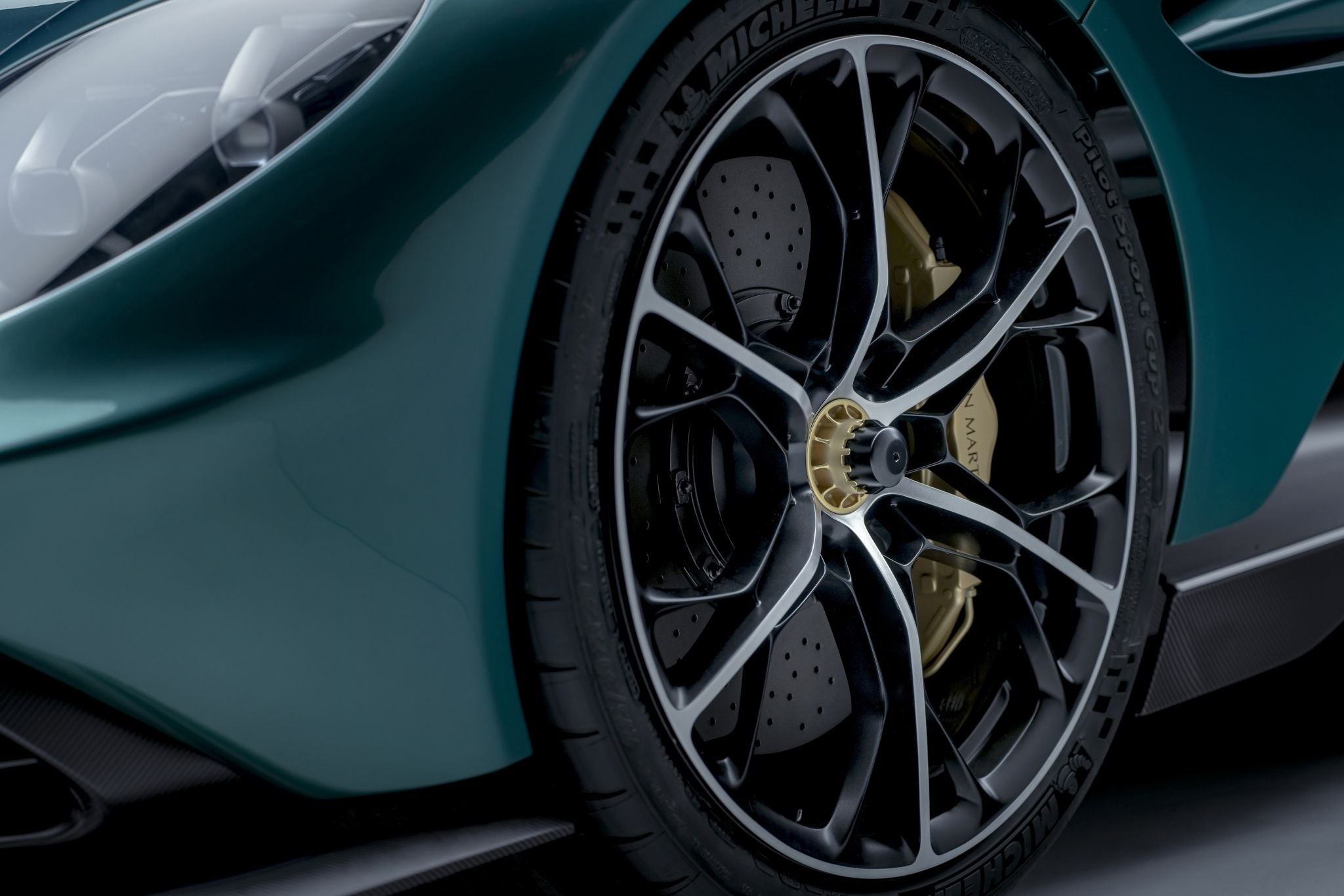 Get down at eye level with the beltline and look toward the front wheels, and you’ll notice you can see all the way through to the wheel arch. Effectively, the back sixty percent of the wheel arch is open to exit high pressure air and works in tandem with the upper wing function. Fans and the radiator sit at the front, driving that high pressure air through the cooling system. The body of the car is designed to keep the air attached to the car from stem to stern, forcing it directly into the main cooling ducts in the engine. An angular shark-fin-shaped “winglet” conducts airflow like a metal arrow heading toward the back of the car.

“Air hugs the side and doesn’t let go,” Reichman explains. “Normally, if you didn’t have this little winglet, the air would spill out. That winglet directs the air down the side of the car for the cooling effect.”

The lower wing directs flow under the car, focusing on stability on the road. After the air passes along the front, it separates again and diffuses at the back; along the way, air weaves in and out of beautifully-engineered gills. 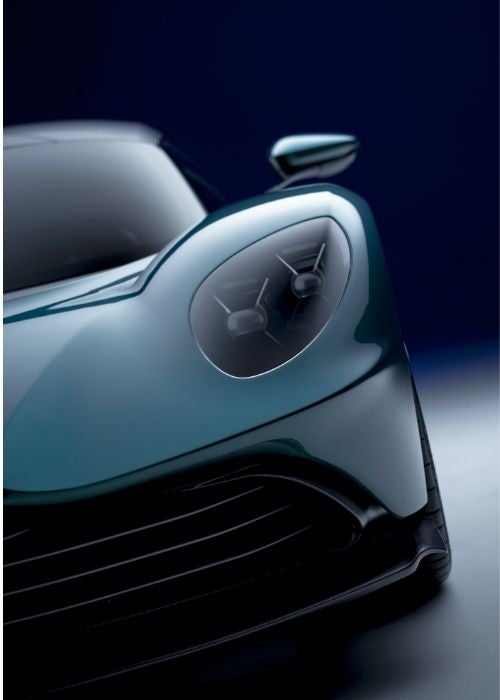 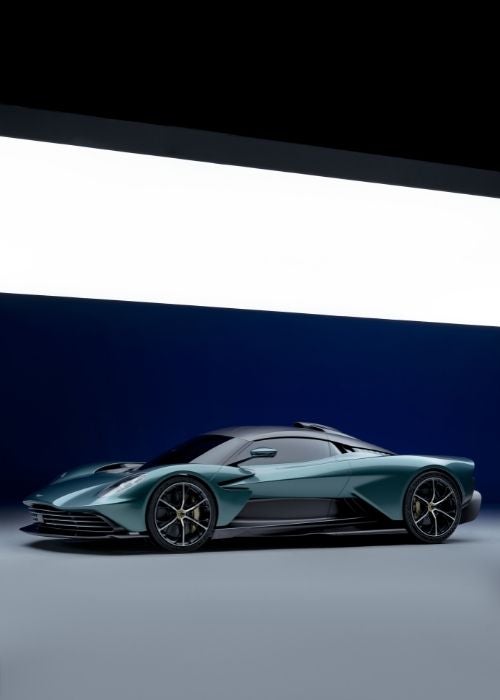 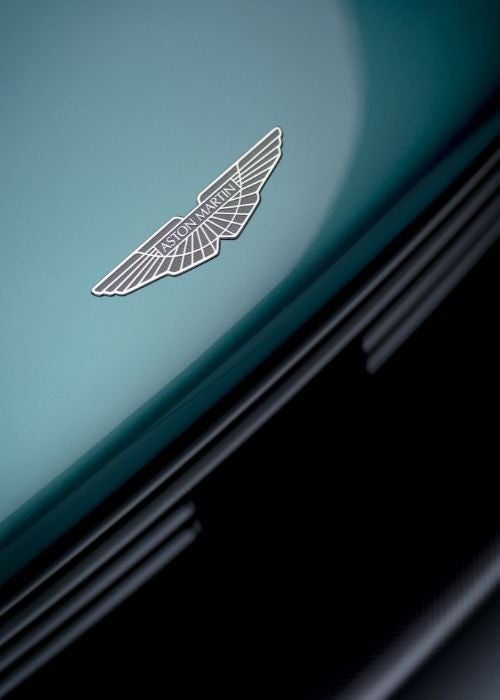 Different from the previous model, the Valhalla has a fully deploying wing, which raises up about 240 millimeters to create a breakaway point for airflow off the roof. The snorkel, which is derived from F1 engineering, provides a clean-air breathing tube for the V8. Unfortunately, that snorkel also brings a challenge: while the mid-engined Valkyrie was built as a coupe and then a spider, Reichman says the Valhalla “probably won’t” be offered as a convertible as the next model in that lineage.

“It’s very difficult with a snorkel like that. I’m not saying never, but there isn’t a plan,” Reichman says. 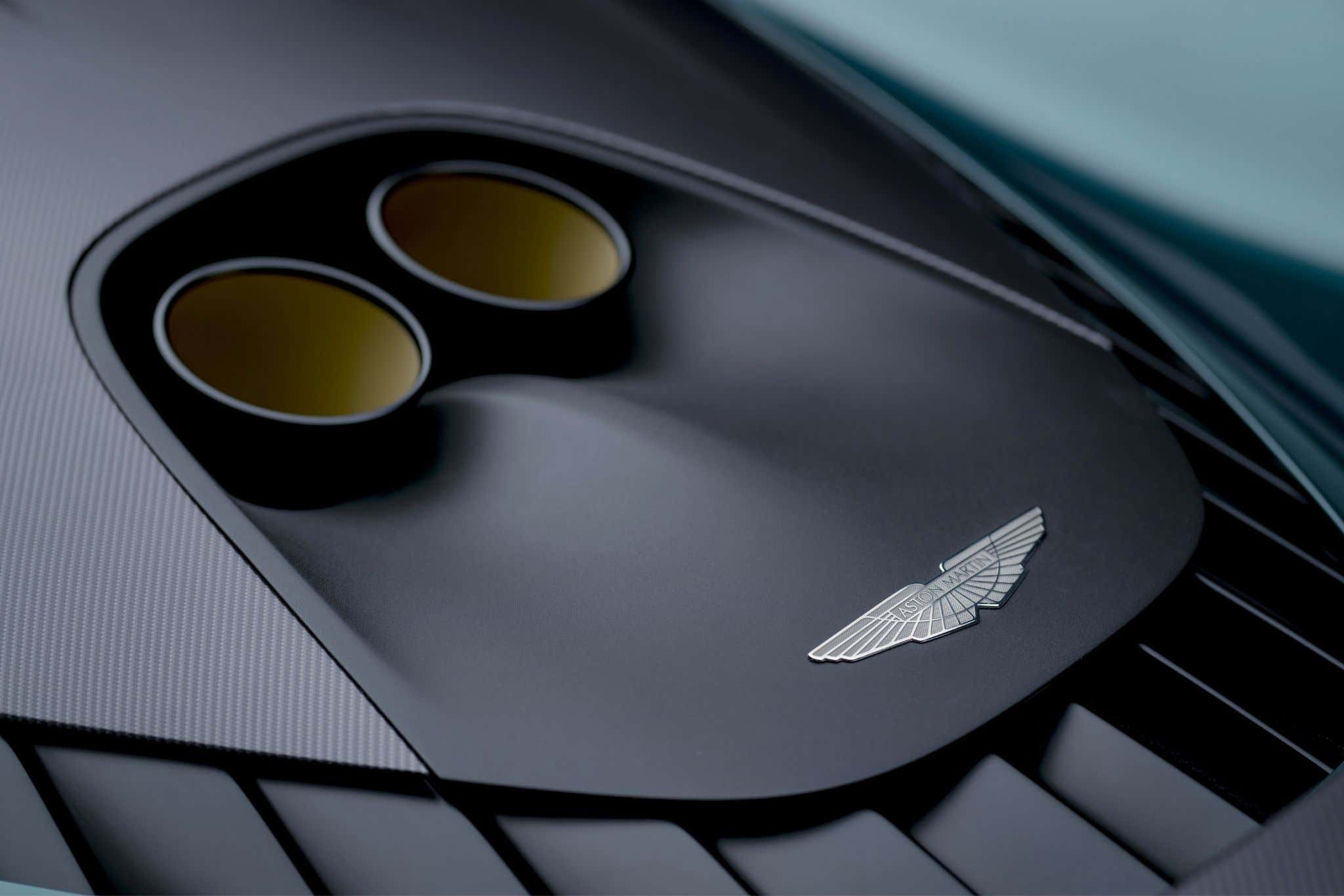 Another F1 touch on the Valhalla is the presence of two large exhaust pipes that sit in the center of the rear of the car. The pool of hot air exiting here helps to draw cool air over the top of the car, which is key for performance in an area that can get to about 1000 degrees Celsius, Reichman says. Zirconium coats the pipes to protect the carbon fiber tub from the intense heat.

Even the grille, which generated some questioning when the design was revealed, has an important function for engine cooling.

“My role is to create a muscular form that represents Aston Martin,” Reichman says. “Aerodynamics alone can’t sell a car; as attractive as it may be, no one buys a coefficient of drag. The designer’s job is to take all of the science and say, ‘Yes, and that idea could look like this.’” 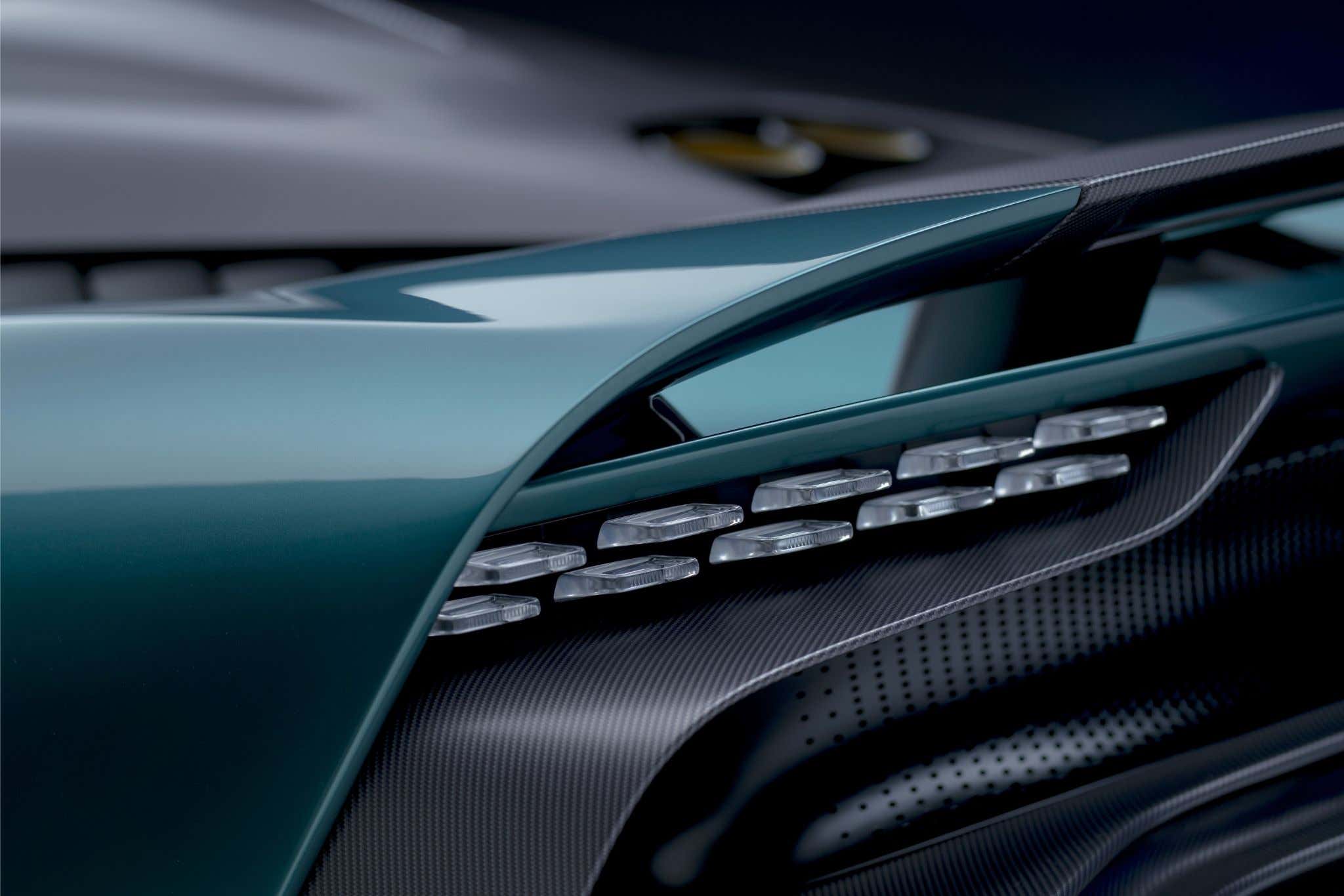 The chief designer recognizes Lamborghini as a “shock and awe” automaker (and not as an insult) that turns heads, but that doesn’t mean it’s what he wants for Aston Martin. He sees the future as a continuation of the meticulous attention to detail that represents the elegance of the Aston Martin brand. Reichman sees a new impetus and passion under F1 billionaire team owner Lawrence Stroll (his son is driver Lance Stroll). It won’t surprise me at all to see more technologies bleeding over from the racing side to the production side in the future.

“Even when you start to sketch, you have an understanding of the art of the possible and impossible,” Reichman says. “You’re always trying to push the boundary and change. Valkyrie taught me a lot and I used a lot of those influences and the language in this car as well.”