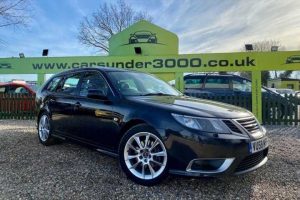 The 9-3 flagship is rare, stylish, fast – and cheap now, too

We all know that certain cars suit one bodystyle better than others. Sometimes it's due to design, sometimes it's complicated by the rivals facing it or sometimes the extras weight of a different body; on occasion it's all three. But it's seldom that a car is equally compelling when offered in more than one configuration. The Saab 9-3 Turbo X is the perfect example.

As a four-door saloon, it was always going to struggle somewhat. Because it would inevitably be pitched against cars like the BMW 3 Series and, though the XWD four-wheel drive was innovative for the time, there was only one way those comparisons would go. But as an estate (or Sportwagon, as it was known at the time), it was a lot easier to look more favourably on the Saab.

Not only was it a more stylish proposition than the saloon, with its swoopy rear lights and well-proportioned silhouette, the Turbo X also better suited an estate's remit. Put simply, its underpinnings ensured the 9-3 would never be the most dynamic drive; however, with 280hp from the 2.8-litre V6 and loads of turbocharged torque, plus the trademark Saab durability, it made a much more attractive proposition as a family wagon.

Presumably that's exactly what this one has done (complete with tow bar), ferrying whoever and whatever needed to go somewhere with the minimum of fuss. It's accrued 112,000 miles in that time, or just about 10,000 a year, and looks fit for plenty more. Though many will suggest the GM era Saabs are not sturdy as their predecessors, this car's condition is pretty encouraging. Naturally there's some bolster wear on the driver's seat, but every other chair looks more than presentable; the boot isn't torn up, the steering wheel leather isn't tatty, and the wheels still look smart. Obviously it isn't factory fresh, but for this much use the Saab seems very good indeed.

This particular one holds additional intrigue as a manual Turbo X Sportwagon; the special edition was always going to be rare, with just 500 of the 2,000 made coming to the UK, and it's seldom that the estate comes up for sale. Discount the automatic cars and it makes one like this particularly hard to find.

And get this: the MOT history is just about flawless. The past tests are a sea of green, all the way back to its first in 2011. There have been three advisories in a decade, for worn tyres and lightly corroded rear discs. In 10 years and more than 100,000 miles, three advisories. If anything points to a durable car being well cared for, this would be it. There's said to be "endless" history with it as well.

For £5,695, then, or hopefully a bit less, the 9-3 Turbo X Sportwagon looks to have a lot going for it. As fast, unassuming, dependable family transport, it's hard to think of much better at so little money. There'll always be a used 3 Series of some kind or another to lure you away, but just as much reason to think a little differently – nowhere is that better represented than with a trusty Saab.