Home » Auto News » S1 Pro overheats on test-ride; Ola rep has to push me up the slope

S1 Pro overheats on test-ride; Ola rep has to push me up the slope 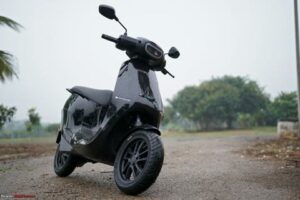 We must have done around 6 km, during which the battery managed to drop a good 12%

BHPian Vikram9193 recently shared this with other enthusiasts.

I took a test ride today. Had the overheating issue and the Ola guy had to push me up a steep slope

A pity because the performance and handling are great for an entertaining hill ride. I rode in hyper mode on a small uphill stretch and overtook a few cars very fluently. The scooter corners beautifully, stable and solid like a good bike.

I then rode gently to a spot with an exceptionally steep slope. The sort that you do in first gear I think. It refused to switch to hyper mode. After a restart it obliged, and we climbed smoothly up in hyper. At the top, it went back into eco.

This happened a couple of times. Since we had another super steep slope to clear on the way back we attempted it with a bit of momentum in normal mode. Not happening. Nearly made it to the top and stopped. Ola guy got off. In the meanwhile, the scooter went into Eco mode. Now power wasn’t enough for even one person to climb the slope. So he pushed me the remaining few metres to the top.

After that, we did another restart and managed to get into normal mode. Rode back to the starting point in normal mode with no further drama. In total, we must have done around 6 km (sorry I didn’t check the odo), during which the battery managed to drop a good 12%, from 56% to 44%. Seems excessive by any standard, since most of the test ride was done in normal mode in thick traffic.

Battery temps were stable throughout at 38-39 C. Perhaps it is the motor or controller or something else that overheats.

It’s inexcusable how Ola has continued to sell this scooter without AFAIK acknowledging or fixing this issue. That said the Ola guy told me he and a friend had done Mussoorie two up in sport mode, riding gently, and had no problems. I think that’s believable. Maybe the probably only arises in hyper. He did say that every test ride today entailed riding in the hyper mode so maybe the scooter was already warm. Since my intended use case would be riding up to Mussoorie in hyper mode, I wouldn’t risk it. Imagine trying to drag this thing up Landour’s bazaar. Then again I didn’t try out sport mode, it might be quick enough as well and it’s possible the issue wouldn’t arise then.

I think the least Ola could do would be to specify that hyper mode, like ludicrous mode, is meant for short durations and will disable itself from time to time. Whereupon the scooter should switch to Sport mode. Not to #$## Eco mode where you can’t even get up a slope or keep up with traffic.