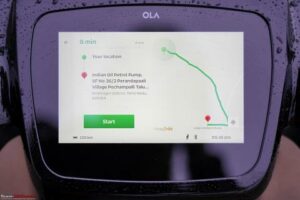 At present, Ola offers navigation based on MapMyIndia on the S1 Pro e-scooter.

Ola Electric is rumoured to be developing its own navigation service for electric vehicles.

The report states that Ola’s new navigation system is still in its early stages of development. It might debut on the S1 and S1 Pro later this year. It is also said that having an in-house map service would enable the company to quickly update its charging network, service centres and other information.

At present, Ola offers navigation based on MapMyIndia on the S1 Pro e-scooter. The map service has been integrated into the MoveOS 2 operating system. It is expected to be released next month, once the beta testing phase is completed.