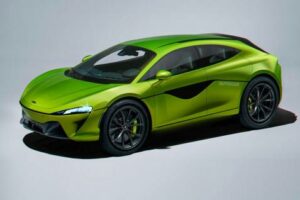 The McLaren SUV could have performance levels similar to that of the Aston Martin DBX 707.

According to a media report, British supercar manufacturer McLaren, is rumoured to be working on an all-electric crossover. The all-new all-electric SUV from McLaren is expected to be introduced sometime before the end of the decade.

While details are scarce, reports suggest that the upcoming McLaren SUV will come with either a dual or tri-motor setup, powering all four wheels. The SUV is also expected to sit relatively low and have compact dimensions, with performance levels similar to that of the Aston Martin DBX 707. Reports also state that the upcoming electric SUV from McLaren could be priced anywhere between GBP 2,50,000 to GBP 3,50,000.

McLaren, which has long denied its plans to produce an SUV, seems to have had a change of heart, mainly based on the sales results of its competitors. SUVs like the Lamborghini Urus and Aston Martin DBX have heavily outsold their respective supercar siblings globally. Even Porsche’s SUV models, such as the Macan and Cayenne account for well over half of the brand’s total sales volume when compared to its supercar offerings.