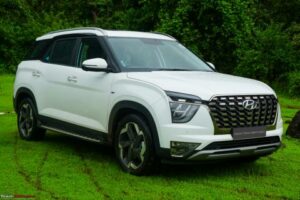 The Alcazar is available in three trim levels – Prestige, Platinum and Signature. It competes with the MG Hector Plus and Tata Safari.

According to a media report, Hyundai has discontinued the entry-level 6-seater variants of the Alcazar. It is said that the SUV is no longer available in 6-seat Prestige Petrol MT and Prestige (O) AT trims.

The Alcazar is available with two engine options – a 2.0-litre petrol engine producing 157 BHP and 191 Nm and a 1.5-litre diesel engine that puts out 113 BHP and 250 Nm. Both engines are offered with either a 6-speed manual or 6-speed automatic transmission.

It is believed that a lack of demand may have forced Hyundai to take these variants off the shelves. Both variants were listed on Hyundai’s official website at the time of compiling this story.