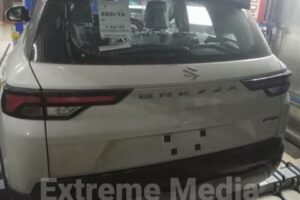 The new Maruti Suzuki Brezza is also expected to get a factory-fitted CNG option.

According to a media report, production of the 2022 Brezza has started at Maruti Suzuki’s Manesar factory. The crossover is expected to be launched in May 2022.

The ‘Vitara’ name will be dropped and the upcoming model will simply be called ‘Brezza’. It will be powered by the updated 1.5-litre K15C petrol engine that produces 103 BHP and 137 Nm. The engine could be paired with either a 5-speed manual or a 6-speed automatic just like the Ertiga / XL6 facelift. Reports also suggest that a CNG variant could be added to the Brezza line-up.

Leaked images have already revealed some of the changes made to the exterior design of the Brezza. The car will feature a new grille and slim twin-pod headlamps with L-shaped LED daytime running lights. At the rear, the rectangular tail light clusters will be replaced with slim L-shaped units.

On the inside, the Brezza is likely to get a larger touchscreen infotainment head unit, a conventional twin-dial instrument cluster and a sunroof.