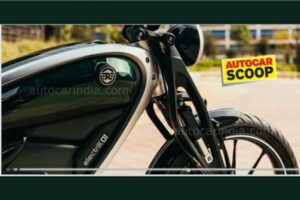 The Royal Enfield Electrik01 concept gives us a preview of the brand’s first all-electric bike.

The first image of the Royal Enfield electric bike concept has surfaced online. It is internally known as ‘Electrik01’ and is seen as a precursor to the brand’s first all-electric offering.

The Royal Enfield Electrik01 concept features neo-retro styling with several unique touches. One of the most striking features is the girder fork setup, which was quite common on pre-war-era bikes. A sleek tubular frame emerges from the headstock. The brushed aluminium finish nicely contrasts with the dark green and black surfaces.

The Electrik01 is said to be in its early phases of development and the one seen in this image is the Quality Function Development (QFD) concept. There’s still no word about its electric powertrain, however, the bikemaker believes it would be a “game changer”.

While the production version of the Electrik01 is still a long way away, this concept gives us a peek into the brand’s electric future.