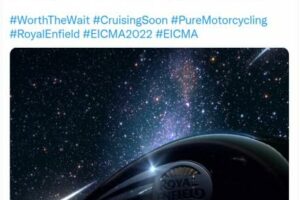 Royal Enfield trademarked the name ‘Constellation’ in February this year.

Royal Enfield has released yet another teaser of its upcoming 650cc cruiser. The bike will be unveiled at EICMA in Milan on November 8, 2022.

The teaser image shared by Royal Enfield on its social media handles shows a teardrop-shaped fuel tank with the brand’s emblem and the caption – “Astral. Celestial. Interstellar.”

If you recall, Royal Enfield trademarked the name ‘Constellation’ in February this year. The fact that the teaser image shows a starry night in the background suggests that it could be the official name of the 650cc cruiser.

The brand’s flagship cruiser is likely to be powered by the same 649cc parallel-twin engine used in the 650 twins. This engine develops 47 BHP and 52 Nm and is paired with a 6-speed gearbox via a slipper clutch.