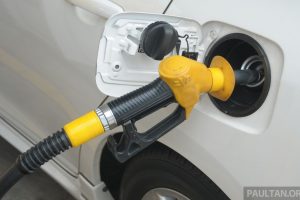 The government has announced it is revising the ceiling price for RON 95 petrol as well as Euro 2M diesel with immediate effect, lowering it by three sen from that currently, which is set at RM2.08 per litre for RON 95 and RM2.18 for diesel.

In a statement issued today, finance minister Tengku Datuk Seri Zafrul Aziz said that the ceiling for RON 95 has now been revised to RM2.05 per litre, which means that this is the maximum consumers will have to pay if market prices push the pump prices above that price level, with the government covering the difference through subsidies.

Meanwhile, the ceiling price for diesel has been lowered to RM2.15 per litre. Accordingly, if world oil prices dictate that these fuels are priced below those levels, then the weekly prices of both will be priced cheaper than the capped price.

Tengku Zafrul said that the decision to revise the ceiling price was taken following the recent trend in which market prices of petroleum products were on a sharp increase due to global demand. He said that the government remains committed to reducing the rakyat’s cost of living and will take appropriate steps to balance gvernment subsidy liabilities with needs in order to preserve the welfare and well-being of the people.

The retail price of RON 95, RON 97 and diesel based on an Automatic Price Mechanism (APM) calculation will continue to be announced weekly, each Friday. For the week February 6 to 12, RON 95 is priced at RM1.93 per litre, while RON 97 is priced at RM2.23 per litre. As for Euro 2M diesel, it is currently priced at RM2.11 per litre. Euro 5 diesel, which is technically unregulated and always 10 sen more than standard diesel, is now at RM2.21 per litre.