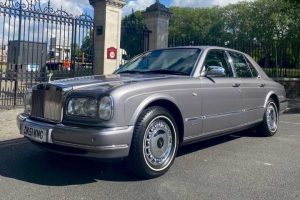 Last of Line Seraph has only 5,900 miles on the clock!

It’s not often that a car can claim to be a rare version of an already rare base, but that’s exactly what this Rolls-Royce Silver Seraph is. The Last of Line variant (known as the LoL, before it meant what it does now) not only represented the winding up of Seraph production – it was the end of the Vickers-owned Rolls-Royce era. The Seraph LoL was the final car to launch before BMW took control and transformed the company with the Phantom VII. The Seraph is the last of the old-school Rollers; but in 2021, might that be a good thing?

This is especially true when the car in question has 5,900 miles on the clock. This LoL (it never stops being funny) could very well be the lowest right-hand drive Seraph out there. There were only 170 of the final editions made, of which just 49 were right-hand drive. Big old Rolls like this are generally solid beasts, not least because with a naturally aspirated 5.4-litre M73 BMW V12 under the bonnet offering 326hp and 361lb ft of torque, the oily bits are nicely under-stressed. This was deliberately so, as Bentley – at that time Rolls’ sister brand – could pursue a more sporting path with its twin-turbo, M62 V8-powered Arnage. A car that shared a platform and bodywork with the Seraph.

The Seraph was very clearly the silky-smooth cruiser, not interested in big numbers but rather wafting to the maximum, with a cushy ride and a cabin trimmed in the finest leathers, wood veneers and, if you were in the back, cushions. This ultra-low mileage car looks appropriately fresh and clean inside, with back seats that are especially inviting. You’re supposed to be driven in a Roller, after all – if you wanted to do the driving, the Arnage was the car for you. Those preferring to relax in spacious, glamourous surroundings (you even get a C-pillar internal mirror to fix up your hair), would be best served by the Seraph. That said, by 1998, tastes were changing.

With BMW’s purchase of Rolls (which, don’t forget, very nearly became a VW brand, before being split from Bentley) the Seraph was to bow out of production just four years after its arrival. A true luxury saloon had proven far less popular than the fast but still plush Arnage, which inspired VW to keep up the trend to some extent with the Continental GT. BMW, with its newly acquired R-R, decided to add performance and better handling into the equation with the 21st century Phantom, leaving the Seraph to look very much like a product of the last century. But, as said earlier, through a 2020s lens, that’s not necessarily a bad thing.

In a car with so few miles on the clock and such a seemingly perfect condition, this Silver Seraph LoL is now as much a modern classic as it is a cut-price way to access Rolls-Royce greatness. ‘Cut-price’ being used as a relative term, because while £85k for a nearly-new Roller sounds good, that much for a car that in slightly less perfect form can be had for half that figure might not be such an easy sell. But clearly, this car isn’t going to end up with someone looking for a hard bargain but rather one of the loveliest ways to be carriage from A to B. Certainly, this is a car that can cater to that request a hundred times over. It’s also a significant part of British automotive history, an end-of-an-era special for one of the country’s oldest and most revered brands that still holds appeal 20 years later. Even if it is called a LoL.