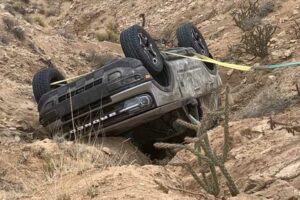 At least we know folks are using their Bronco Sports like they’re supposed to. While a crumpled example of Ford’s baby off-roader has already come and gone on Facebook Marketplace, another popped up on Sunday in the Rio Rancho Off Road group. This time, though, it was stuck deep in the New Mexico hills and looking for a way out.

The silver Outer Banks model was wheeling outside of Albuquerque when it took its fateful tumble nearly 30 feet through sand, cacti, and probably a scorpion nest or two. It was then that the owner, Thomas Breneiser, posted in the private Facebook group asking for help, and the off-road community rallied the almost immediately to retrieve his rig. Better yet, it was able to drive off under its own power after being righted by a crew of experienced four-wheelers, a Jeep, and a Humvee. 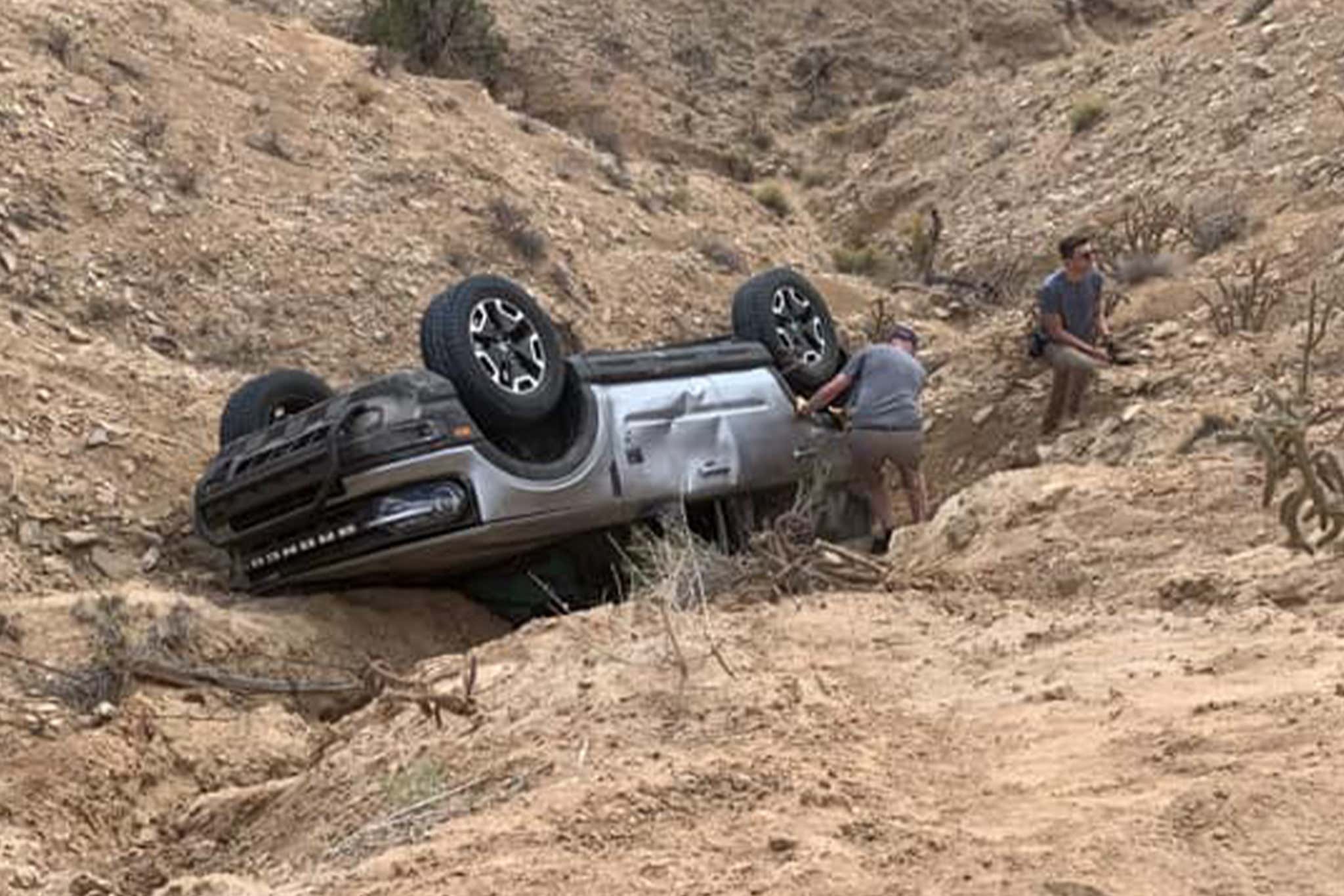 Breneiser was humble in his call for help. As he told The Drive over the phone, he’d had an extremely rough go at it after crashing around midnight, and he waited roughly an hour and a half for emergency personnel to reach him. Luckily, he had an SOS light in his car and he was somehow uninjured; his Bronco Sport, though, looked to be in rough shape.

In his Facebook post, he explained there was no way a tow truck could get to that point on the trail and, at the very least, he wanted to salvage some of his personal items from the Ford as soon as possible. With the coordinates in front of them, good Samaritans got to work locating the truck and planning their mission.

That might sound cheesy to someone who’s not familiar with off-roading but really, it’s exactly that: a mission. It requires a methodical approach so everyone stays safe and, in a perfect world, so does the rig that’s being recovered. It’d be easy to drag the Bronco Sport on its roof and call it a day so long as it made it back to the trail. However, more than a few members of the Facebook group started coordinating so the car had the best shot of surviving. 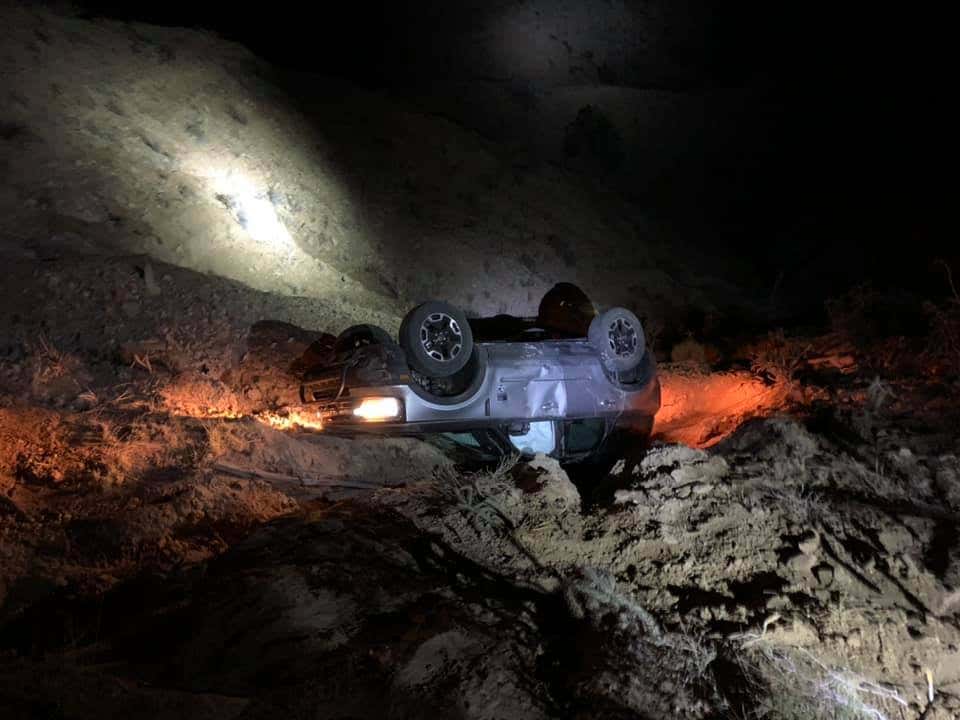 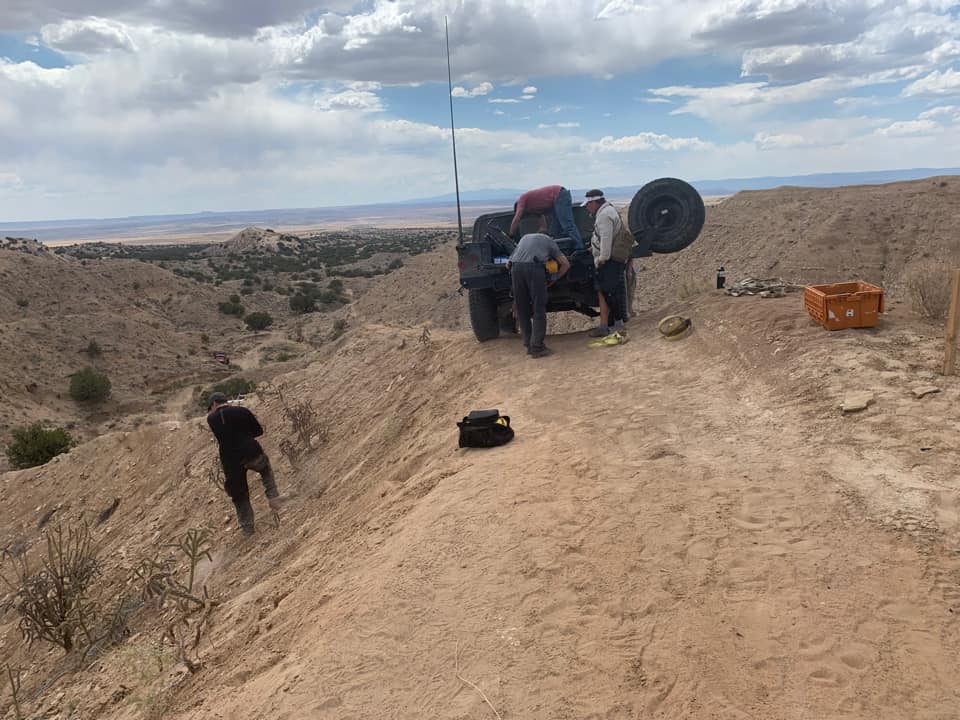 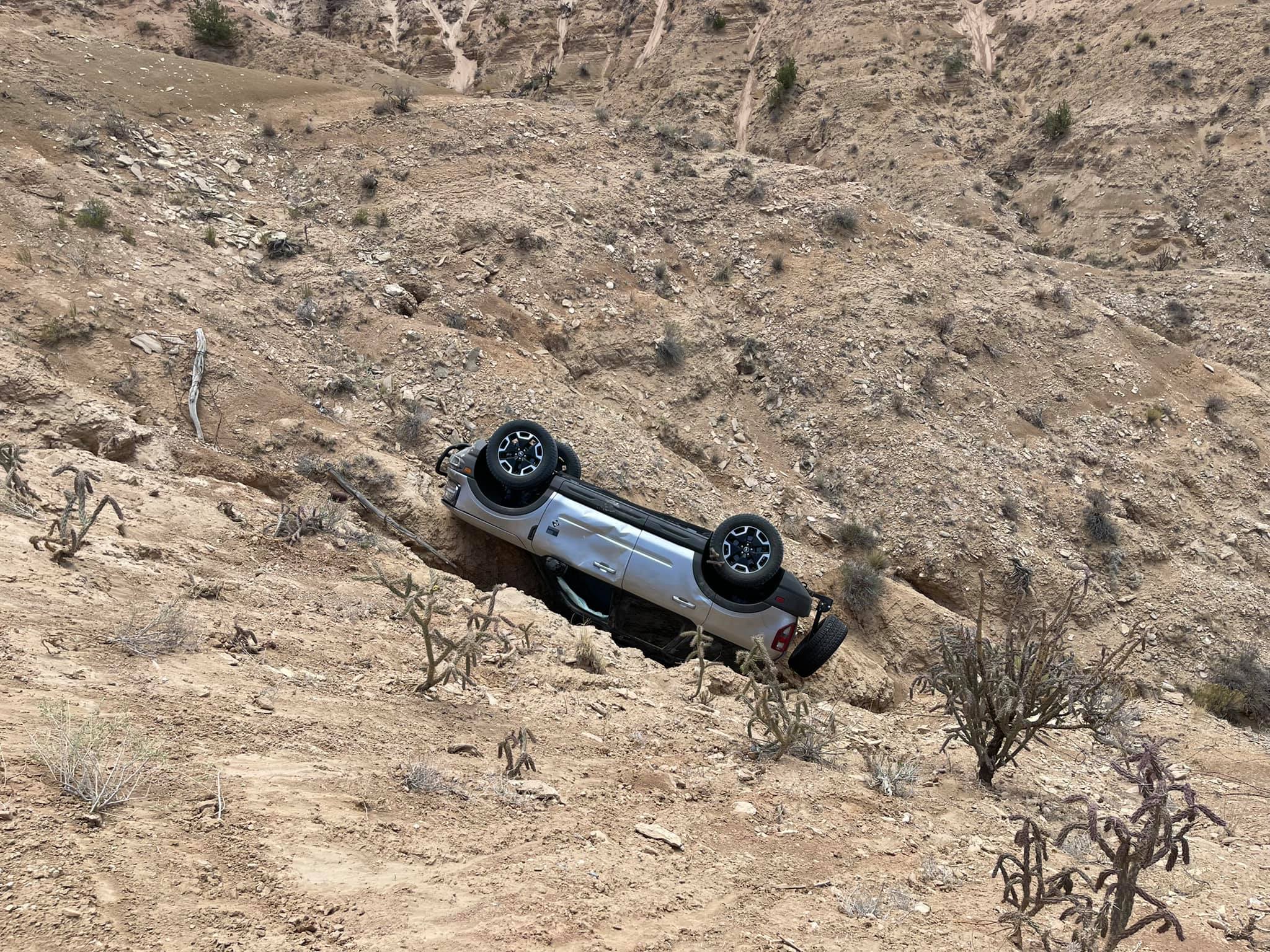 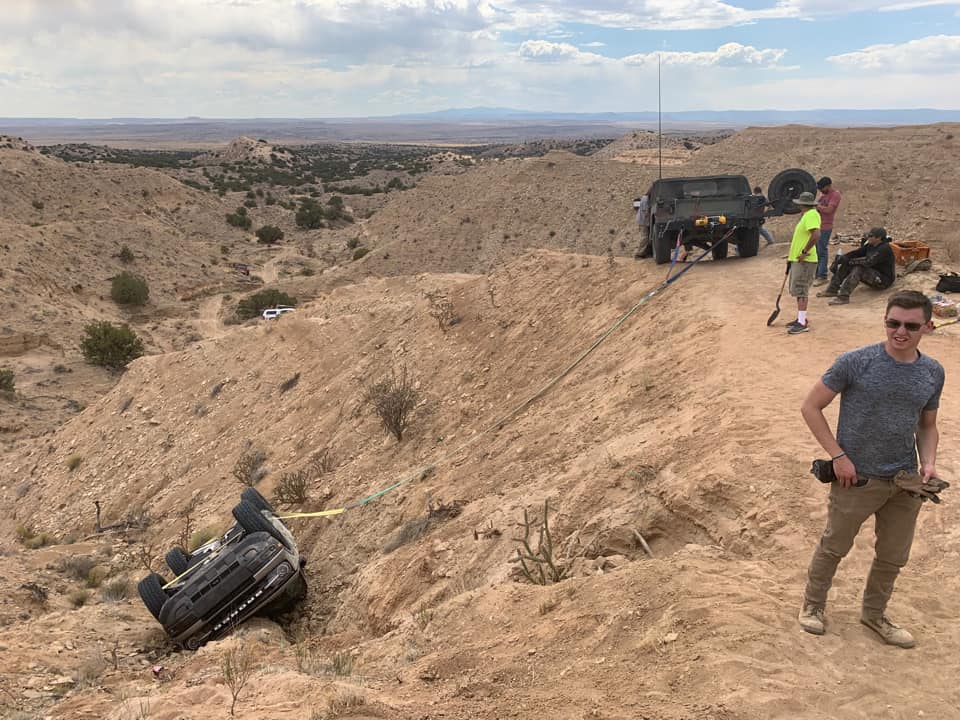 Now, the initial incident happened on Saturday night. Fast forward to Sunday morning and that’s when Breneiser made the Facebook post asking for a hand. By 1 p.m. local time, there was a team on-site led by Scott Parker and Mario Przepiora. I spoke with Parker on Tuesday, and he gave some background on his off-road experience:

Going into it with years of experience under their belts, Parker and the rest of the team started working first and foremost at getting the Bronco Sport shiny-side-up, and finding the best place to hook their straps was crucial. As photos show, they were able to loop them near the driver’s side wheels and carefully pull the Humvee they were attached to forward. With plenty of on-the-fly tweaks, they managed to get it upright and move on to the next step.

After securing the truck with a strap around its B-pillar, they were ready to pull it to higher ground. This involved anchoring it to make sure things didn’t get tippy again while strategically yanking it out with the repurposed military vehicle. As Parker told me, this was particularly difficult and required a ton of teamwork to get it right the first time.

“In terms of difficulty, I would say this recovery ranked near the top, due to our limited working area and the steepness of the terrain and the inablilty to utilize more equipment. Having participated in a lot of recoveries back east, this was definitely harder. The lack of trees or other anchor points made this extremely difficult. I always carry a tool called a Pull Pal or land anchor, [and it] allows us to set an anchor point when none other exists; however, in this situation, due to the softness of the sand and the fact that we had steep angle on both sides of the trail, we had a difficult time get a good anchor point.” 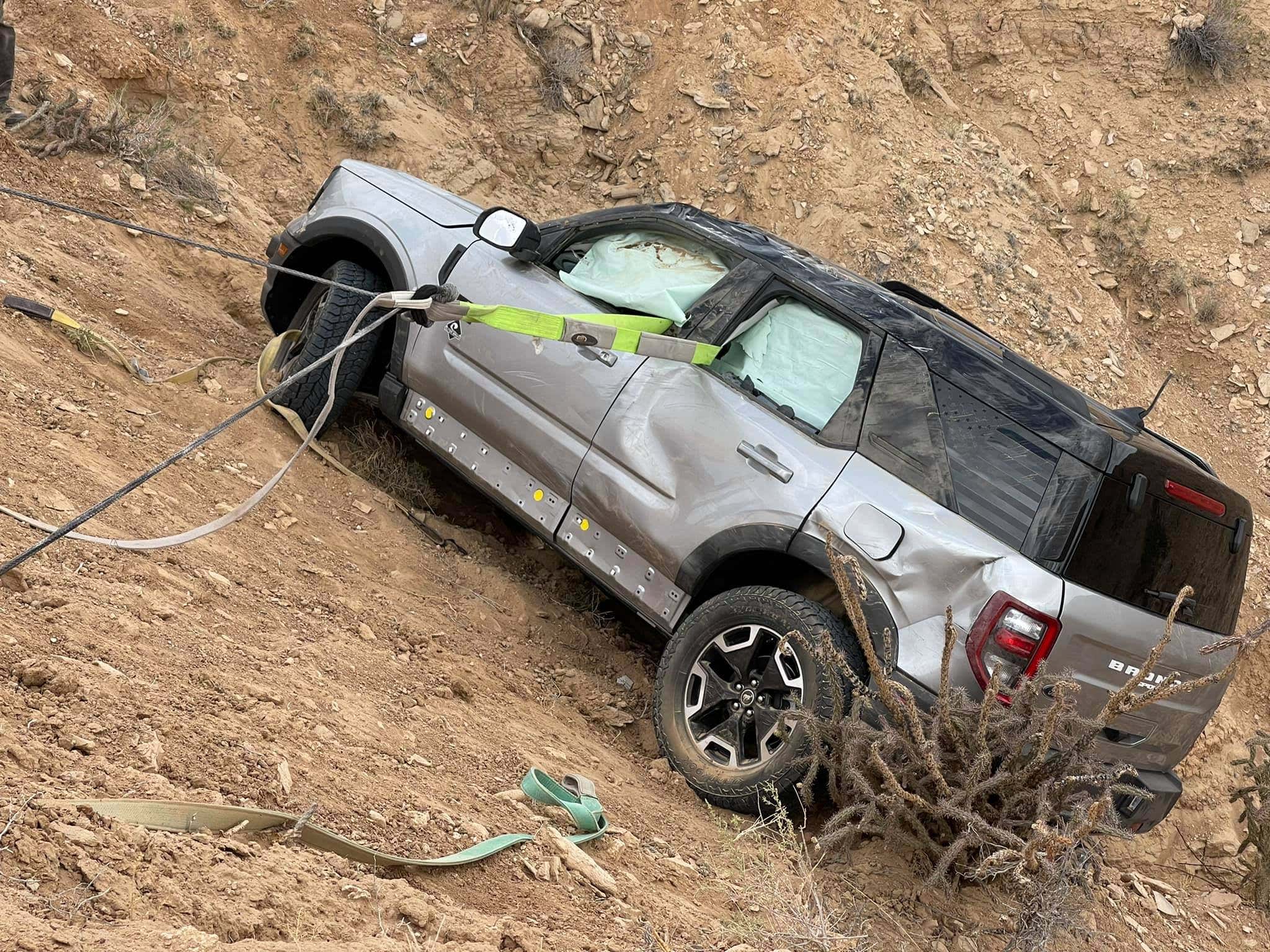 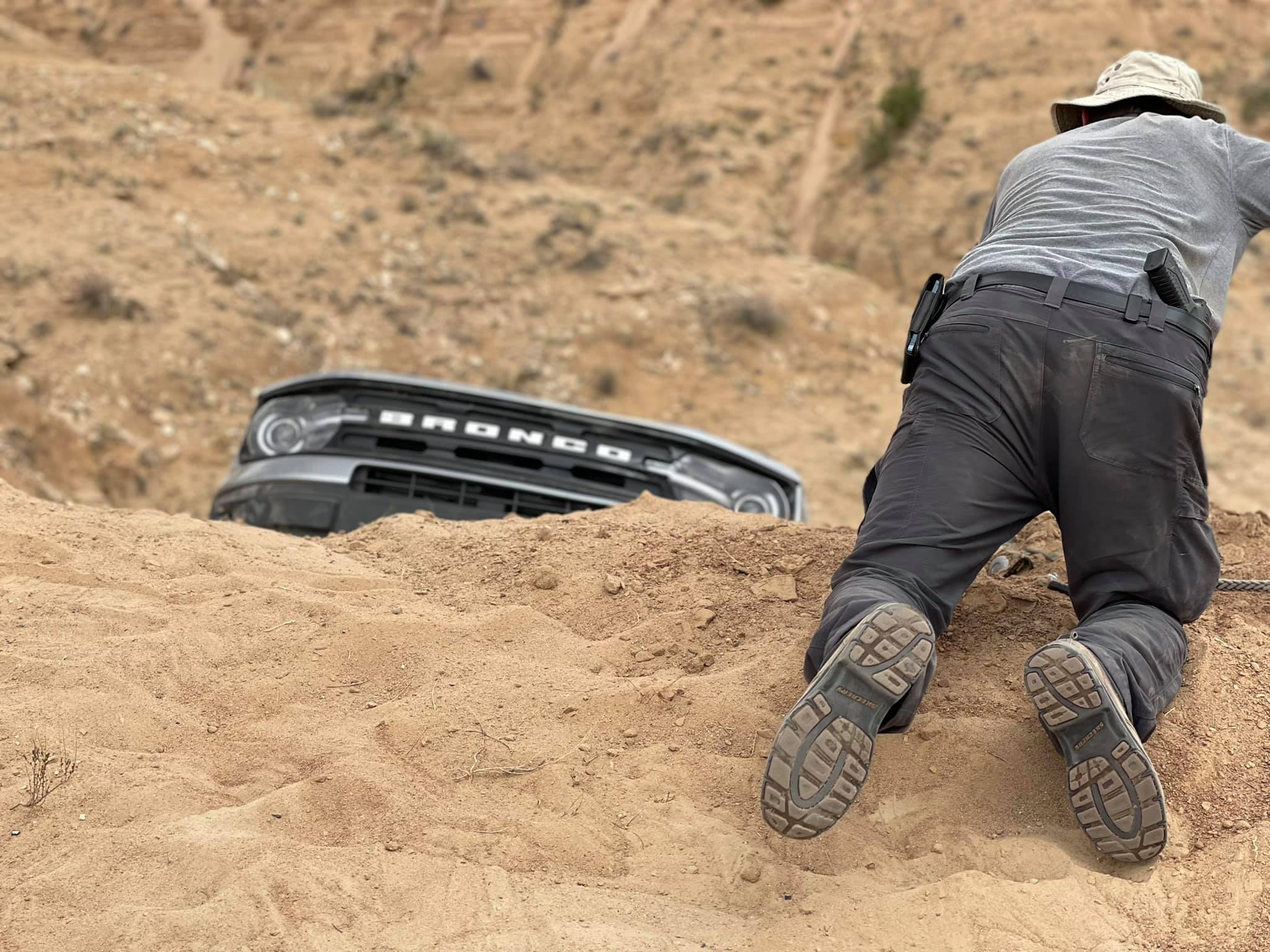 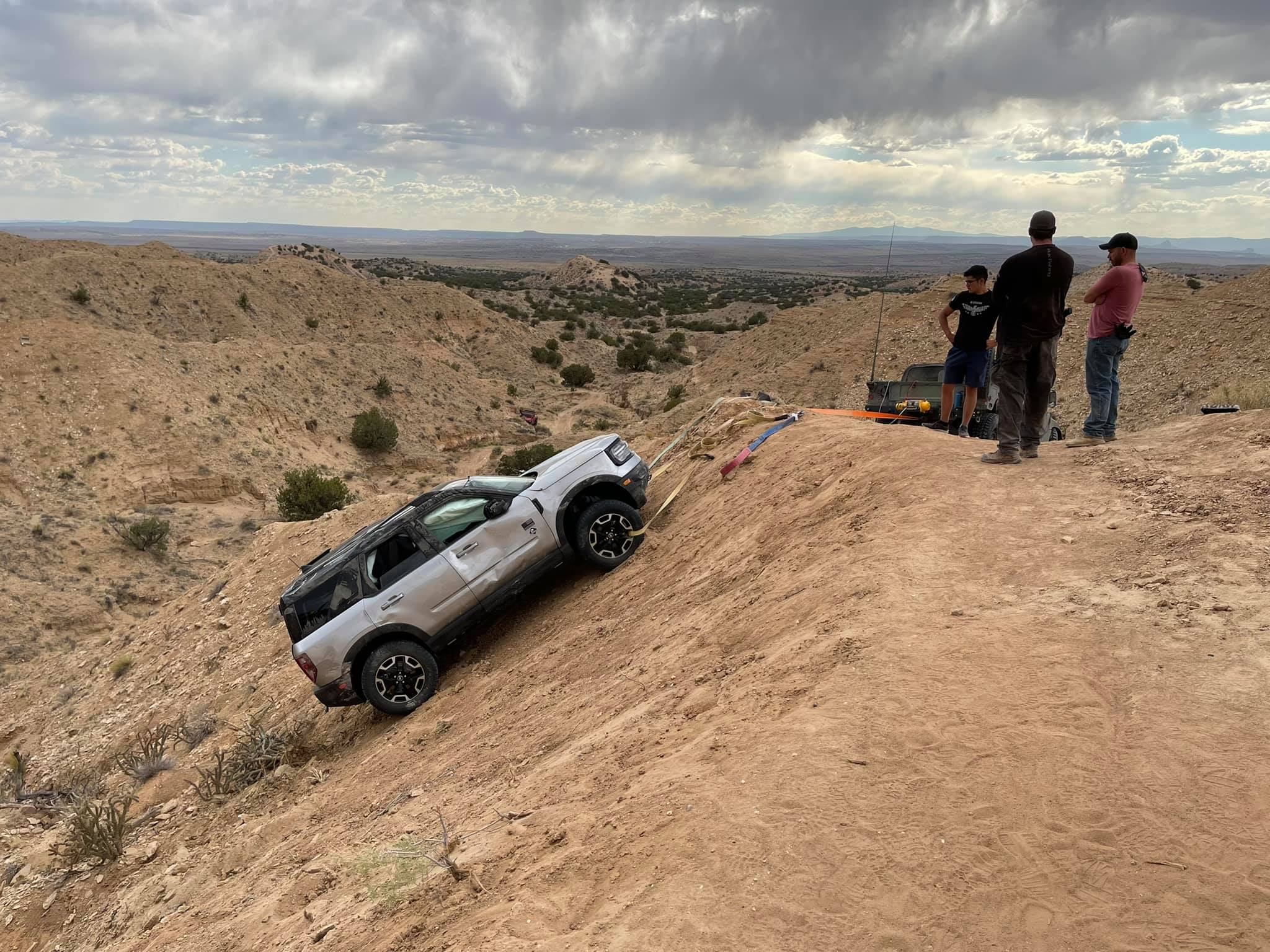 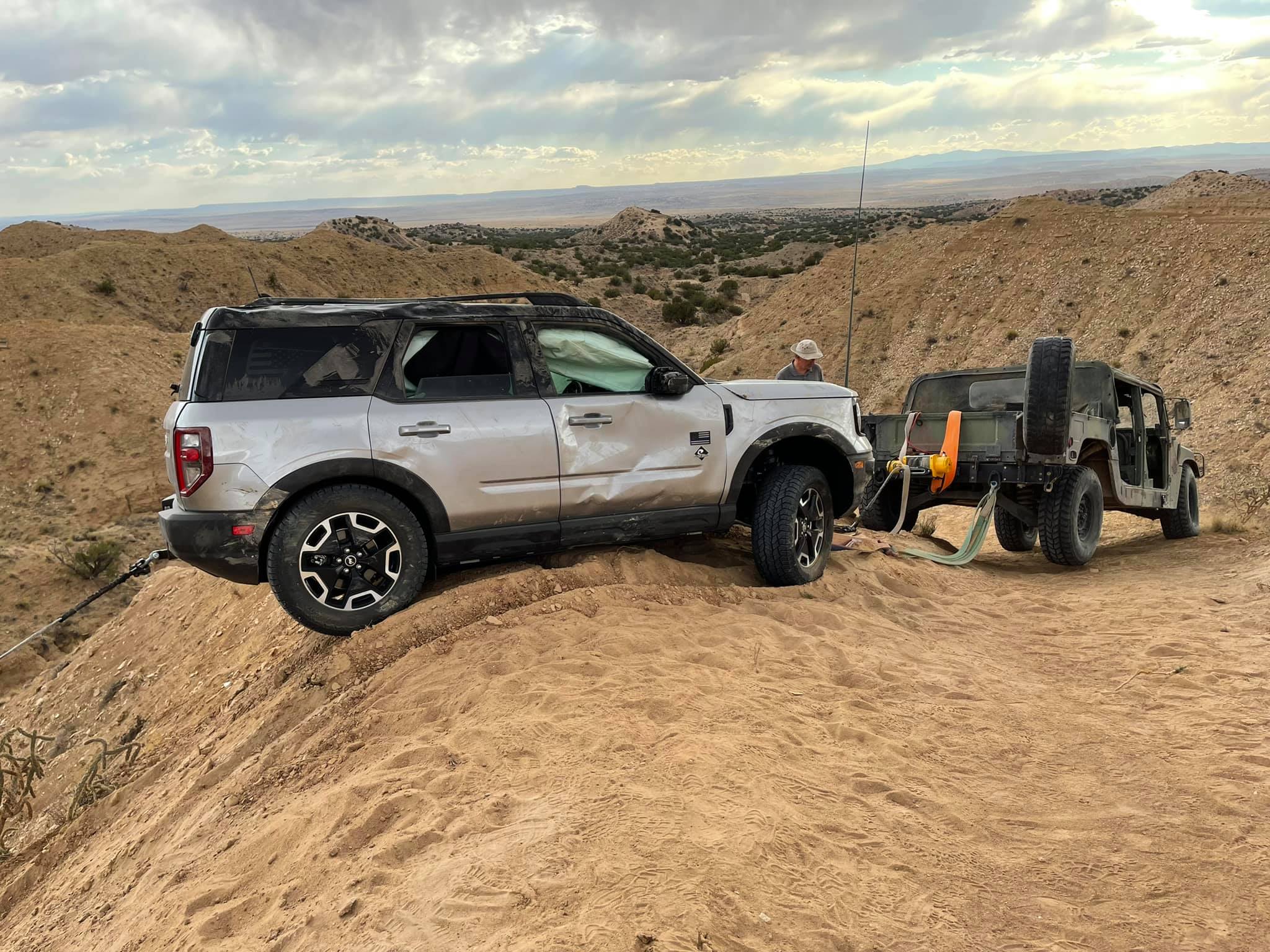 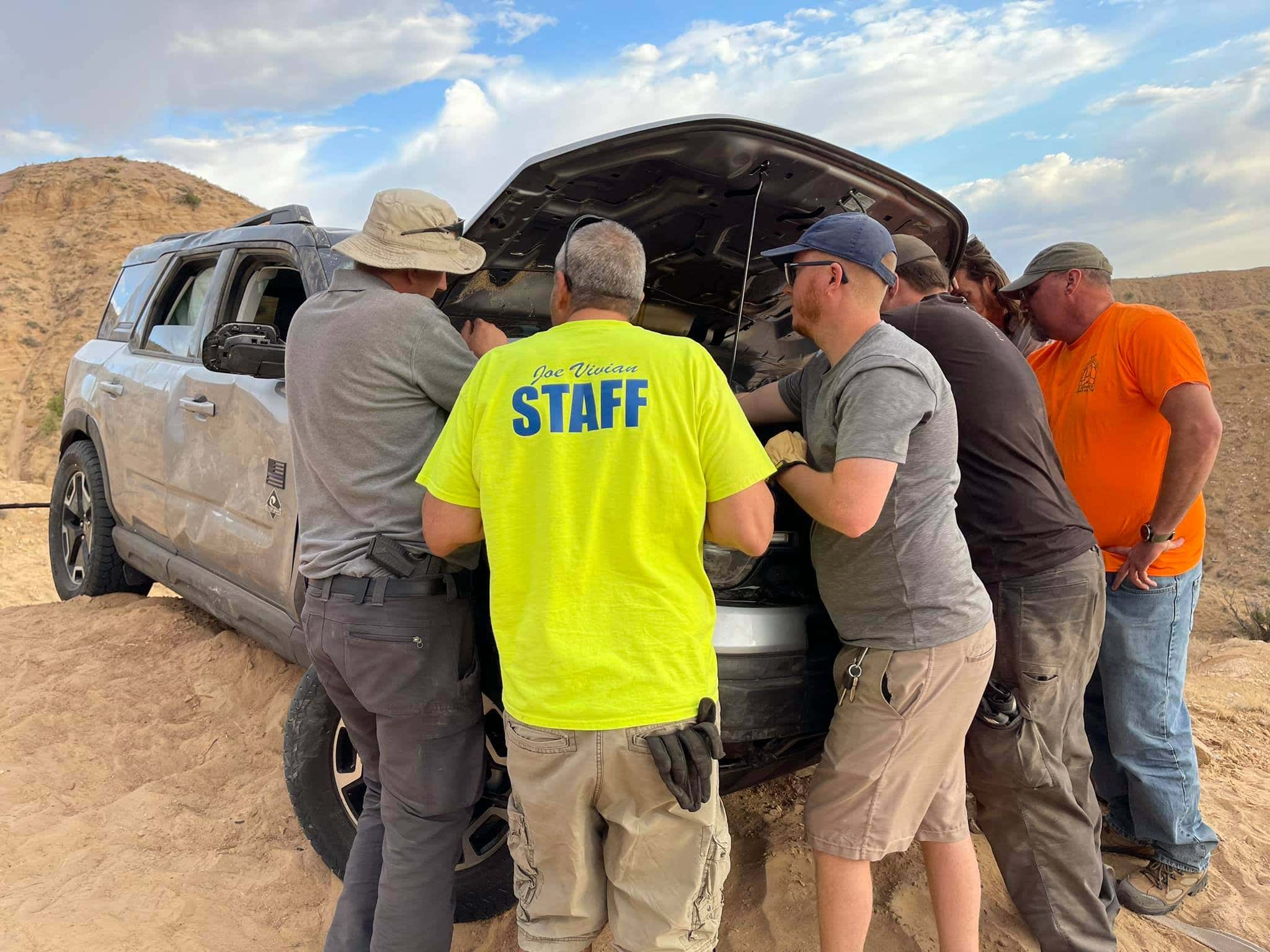 At long last, the Bronco Sport was back where it started, albeit with a lot of visible damage. They popped the hood, pulled the spark plugs, and cleaned them. Fluids were checked and they cranked the Bronco Sport’s engine, which unbelievably fired up and ran on the first try. Despite the windows being smashed, the airbags being deployed, and almost every piece of bodywork being creased or crinkled, its wheels rolled freely and it was time to head for safety.

Breneiser was led out of the Puerco by a group of three vehicles, including the Chevy Colorado AEV Bison you see in the picture below, and drove to a gas station with a full-size spare on the front-driver side. In total, Parker said there were eight or nine rigs nearby to lend a hand. The mission was accomplished once they reached civilization following roughly nine hours of strenuous work. 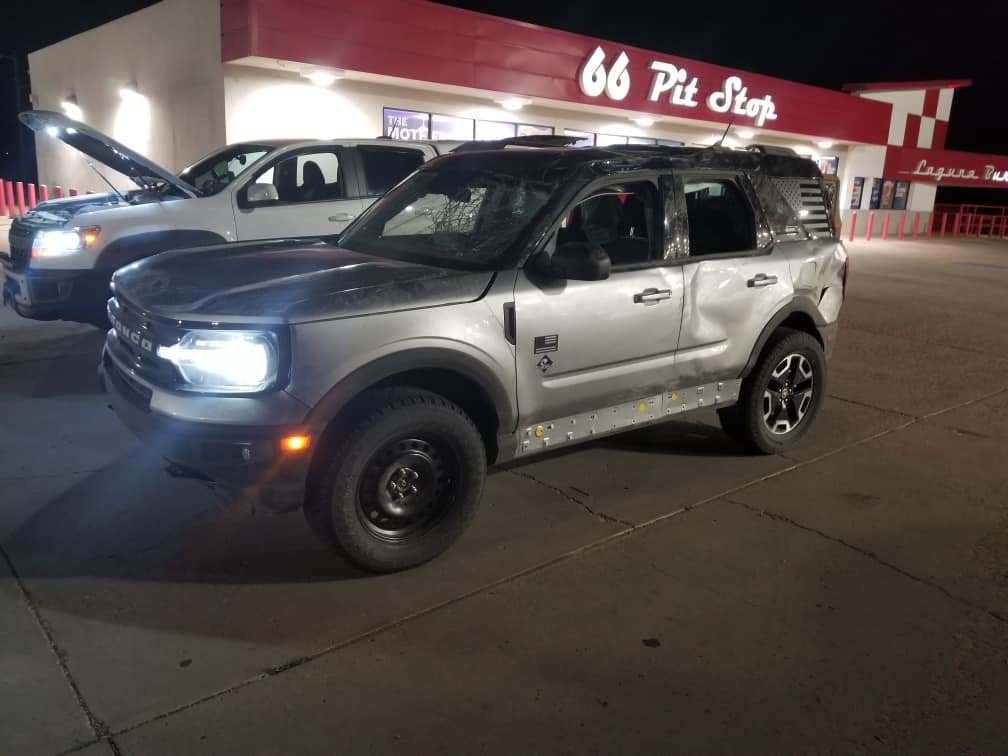 According to Breneiser, the Bronco Sport still drives just like it did before; he said it doesn’t even need an alignment. The mechanics who’ve looked it over in the days since claim there’s no frame damage and it’s all strictly cosmetic aside from the airbags. He’s not sure yet if his insurance will total the vehicle since the amount to repair it is close to its appraised value, but he told me he’d rather have it fixed since it performed so well and, of course, kept him alive.

In all, that’s a day they won’t forget, and rightfully so. Maybe next time someone at Ford will catch wind and offer to help them, too.