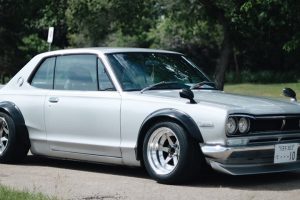 The 1972 Nissan Skyline 2000GT KGC10, also known as the “Hakosuka,” is an incredibly sought-after slice of JDM history — and now a modified Rocket Bunny-equipped version has landed on Bring a Trailer.

This particular model is a Canada-based, Japan-imported modified classic. Plenty of original features remain, such as the badges, wing mirrors, a scowling front fascia, and a black dashboard that houses the factory instrumentation and a Hitachi radio. However, the car also sports lots of changes all around too. For example, the 2000GT is fitted with Rocket Bunny fender flares, front and rear spoilers, coilover suspension, 15” SSR wheels, HID headlights, and a driver’s bucket seat.

Elsewhere we see the 2000GT sitting low and stanced, which is quite evidential at the rear, and it is also fitted with a 2.8-liter L28 inline-six engine. The original car would feature a 160 HP two-liter inline-six, but this offering upgrades the power and delivery thanks to new triple Mikuni side-draft carburetors.

In case you missed it, here’s everything you need to know about the Nissan Skyline GT-R.
Source: Read Full Article