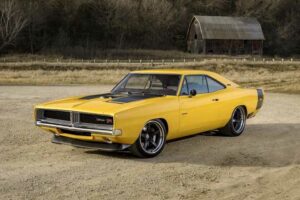 If you know about restomods, you’ll know about Ringbrothers. Jim and Mike Ring have been reimagining classic US muscle for a long time, typically going beyond the usual fastidious restoration route with bespoke parts as well as a more aggressive edge. And some odd names, too: see Adrnln (based on a De Tomaso Pantera), Defiant! (from a Javelin AMX) and Unkl, a project based on a 1969 Mach 1.

Now the firm has shown off its latest custom build, created for Australian Supercars legend Greg Murphy. Called ‘Captiv’ – old habits die hard in Wisconsin – this 1969 Dodge Charger has been subject to a 4,000-hour overhaul. A 4,000-hour overhaul 8,000 miles apart, too, as disassembly began in New Zealand before being shipped across the Pacific to have the bulk of work done.

Where to start? The most notable modification is surely the fitment of a new Hellcat supercharged V8 crate engine, with the full 707hp it’s famous for, paired to a Tremec six-speed manual. Which is the first such conversion we’ve heard of, truth be told, and promises an even wilder ride than the eight-speed automatic. And this was already a 53-year-old car with twice the power of standard…

But you don’t get a reputation like Ringbrothers’ by just dropping newer, more powerful V8s into old cars. The Charger has also been rebuilt by the team as a unibody, which should help fortify the old Dodge against the power it’s now having to deal with. Additional help comes in the form of a carbon driveshaft, fully adjustable suspension and six-piston brakes. You wouldn’t expect a four-time winner of the Bathurst 1000 to make do with any old hardware, right? The paint is unique ‘Pile Up Yellow’ colour from BASF.

That’s in addition to a “litany” of Ringbrothers billet parts, giving the Charger a contemporary look in places that shouldn’t work with the 60s’ styling – yet does. Its latest creation is a 3D-printed steering wheel; maybe it’s not the most beautiful thing in the world, but it integrates nicely into the overhauled interior, which also features a digital dash and what would appear to be an infotainment display. Credit where its due to Ringbrothers, this all looks like it could have been a factory commissioned restomod. Check out that engine bay!

Said to have been many years in the making, Murphy’s Charger is due to head back home to New Zealand soon. Jim Ring said of Captiv: “Greg and his team did phenomenal work before it came here, and it was a joy to work on such an amazing build together.” Certainly if Ringbrothers wasn’t known outside the US before, this is the sort of car that’s going to help spread the word, because it looks awesome. Let’s just hope there’s a better name for the next project…