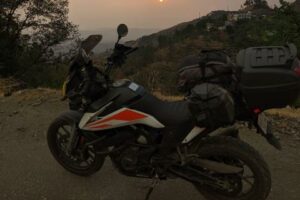 I was going to ride through on the KTM 390 Adventure all the way from Bangalore to Himachal and beyond.

BHPian Red Liner recently shared this with other enthusiasts. This was what I was going to ride through on the KTM 390 Adventure all the way from Bangalore to Himachal and beyond.

It was a cool and cloudy morning on the 11th of May 2022. Thankfully because of Cyclone Asani and the totally unseasonal rains and climatic conditions that Bangalore was witnessing through the month of May.

My destination was Hyderabad for the night, because of the ring road being banned for motorcyclists. There was no way in hell I was going to ride through the hell called Hyderabad at noon to get out of the city. Plus my sweet spot for long distance day riding is about 500-600 kms on Indian highways. My plan was to stop and hook up at a hotel near Shamshabad adjacent to the Hyderabad airport and then make a quick early exit the next morning.

As I was riding that morning on the Bangalore Hyderabad highway, I faced huge gusts of wind blowing across. The wind was so intense that I was finding it difficult to keep the bike steady on the road. At one point a bill board the size of a grown man blew across the highway and made a beeline right across to me – hit my feet and continued its journey. I reckon that could have been far more dangerous had it hit me right across my body. The ride could have ended quite miserably right there and then.

A little further on I “decided” to stop for breakfast. I will tell you why I decided.

I usually do not stop for food when riding long days with a fixed destination for the night. I carry black coffee with me and only stop for water and pee breaks. I have been able to condition both mind and body to go without food for longish durations. In fact, I feel more energetic and alert without food than after food.

But today I felt I could be a wee bit generous with myself and stopped at this non descriptive pop up food stall by the highway well after the Kia factory. 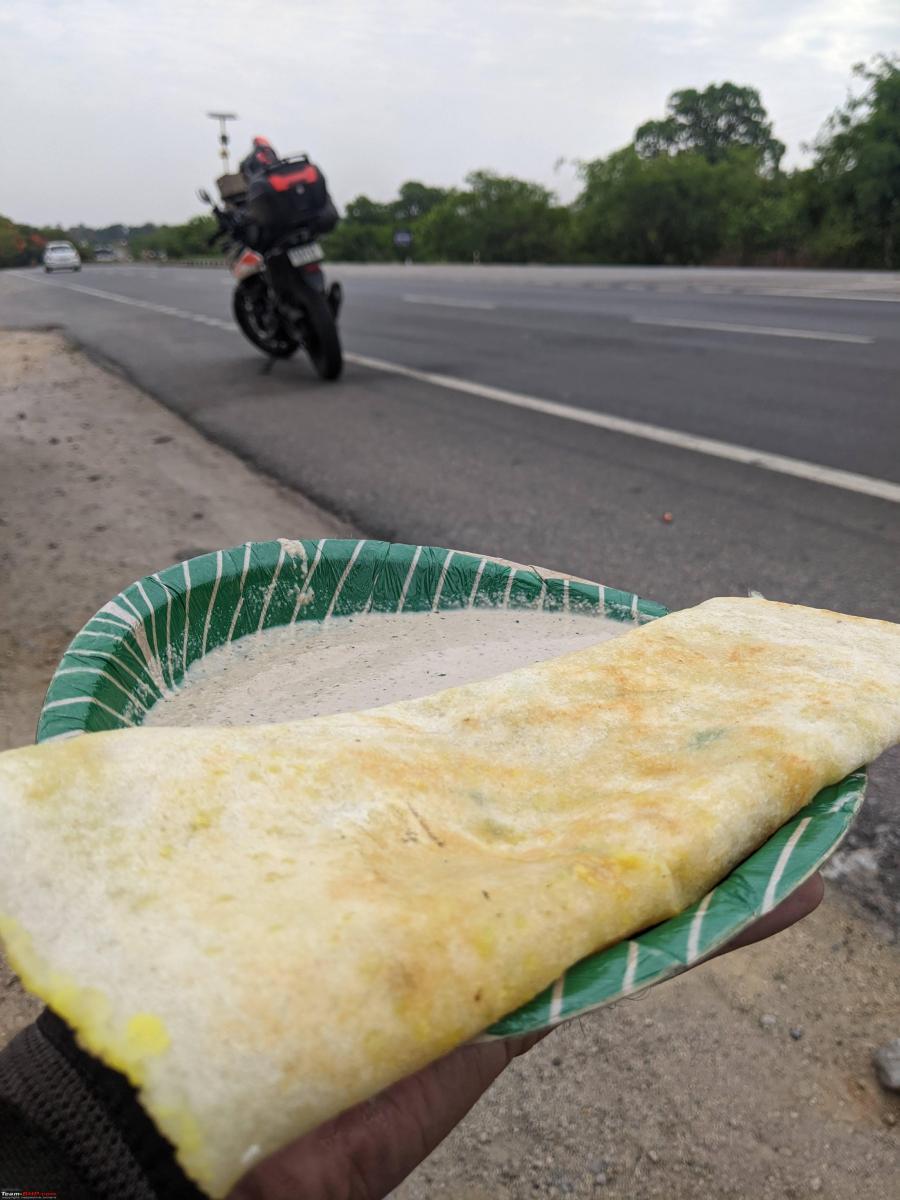 I don’t have a picture of the Vadas, but oh my god, trust me when I say it was the most crispiest golden hued doughnut I had ever eaten in my life.

Somewhere enroute to Hyderabad, Asani struck well and good. The clouds gathered and it poured. My luck, I had my raincoat buried under all my luggage strapped onto the bike. So there we went, stopped at a bus shelter with the locals and I proceeded to get the rain jacket out. Shortly thereafter it started to hail as well, and everyone ran out on to the roads to collect ice that fell from the sky.

I reached Hyderabad well before sun down, which is how I like my rides to end and found the hotel. Ofcourse the exteriors and the approach was nothing like what was pictured on booking.com, but once inside the rooms were good, and the bathrooms were clean. Since I had a hearty breakfast of one Masala Dosa, and one Vada, I decided to skip both lunch and dinner to get to sleep early and wake up before dawn the next morning.

We were off to Nagpur.

Even the ride through the outskirts of Hyderabad the previous evening was nothing short of a nightmare. This was a message I sent a motorcyclist friend from Hyderabad who counselled me against riding through the city the previous day. Leaving the hotel was easy, and so was leaving Hyderabad first thing in the morning. Tonights destination was Nagpur, and I had booked myself into a Treebo hotel – at the entry point to Nagpur pretty close to the highway. Quick entry and a quick exit were top of mind for me.

Once I left Hyderabad, the weather turned. It turned from wet, windy, cloudy to hot, harsh and blimey. So the following then became my new ride schedule.

My breaks were automated for every hour almost on the dot. I would stop to down a full litre of water, and do the wet tee shirt trick. Drown the tee in the water tank that accompanies every dhaba where truckers take a bath. Wear tee without squeezing water out. Start riding immediately and enjoy air conditioned comfort for the next 10 minutes.

I also completely avoided solid food through the day. My meals were multiple plates of fresh Dahi everywhere I stopped along with the bottle of water. Though I was riding solo, friends were made everywhere. As I rode into Nagpur, I made a mistake of taking the big flyover on entry with the metro line that runs above it. Once I crossed my intended turn which was now under the flyover, I realised my folly, and rode around back to the hotel. No biggie, the Treebo was absolutely fantastic – and a real treat after a hard day of riding.

The thing with riding solo is you go the whole day without talking to anyone for the most part. Humans are social animals, and however much I deem myself to be an INFJ (or introvert for short), I still like to connect and talk to people in and around the places I travel to.

So at the Treebo hotel, I had plenty of time for long chats with the manager.

I had been scouting for good deals for hotels online as I traveled on this journey, simply because I was traveling alone. And traveling alone can get frightfully expensive with respect to room rent alone. Obviously the Oyo deals that popped up were too good to be true, and I actually even booked some of them – luckily for me all of them came with free cancelation right upto check in time.

As I read the reviews both on the Oyo platform as well as on Google, something odd struck me. Almost all the reviewers either had “local” sounding names, or the reviews were one liners with a 5 star rating, or they generally went like “we were a couple and we had a good time”. This sent alarm bells ringing in my head, and I promptly veered to the conservative side and canceled all of them.

This is what the Treebo manager told me. Oyo is apparently the only chain which allows unmarried couples to check in. As we all know, most hotels in India do not allow this on principle. Now, considering Oyos budget nature, it doesn’t take einstein to figure out that every teenager with throbbing hormones is taking advantage of this and checking into an Oyo in their town for a good time.

Here’s where things get interesting. These “couples” apparently only use the room for a few hours – the folks at home are not going to be suspicious if you go missing for a part of the day – but if you’re gone overnight then shit hits the fan. So they book for the night, use it for a few hours and leave. The hotel does NOT change the sheets nor sanitise the space. They simply dust off the bed, rearrange things and are good to go for the night.

A few guys I met the next day had similar experiences to share with me. These guys were riding from Tamil Nadu to Leh, and had booked at Oyo like most unsuspecting folks. On arrival, their check ins were canceled, and they were asked to pay 500-1000 bucks more over the Oyo rate if they wanted the room. This is also apparently very common practice.

This information is like gold for a traveler like me. Now I no longer spend any time on the Oyo app – unless its some form of a higher ranked Town House in a major city. Ofcourse, if you’re paying 1500-2000 a night anyway, plenty of other better options exist today.

The Apart Hotel was in a residential neighbourhood. Since I hadn’t eaten for the day, I treated myself to a swiggy delivered dinner from Haldirams which was absolute Yum. Then I took a walk around the neighbourhood, got some mangoes from a neighbour, treated her kids to some chocolate in return, got some biscuits for a mama dog and her litter of puppies, and played around with Momo, the resident pup of the hotel. It rained a little that evening, and the weather cooled down significantly. But not enough to keep my washed clothes wet. They were dry in a matter of an hour. I was reusing the same clothes every day of the ride – just a wash that evening, and good to go the next morning.

All this was accomplished that evening, after riding 500+ kms in abject heat, and I generally had a well rounded day – as opposed to riding like an idiot and crashing into a hotel room only to do the same thing again the next day.