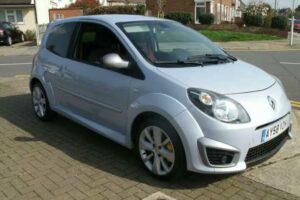 Who'd have thought that the rarest Renaultsport on the classifieds would be one of the cheapest?

When it comes to buying your first hot hatch, there’s a good chance your first port of call will be something with a Renaultsport badge. For most, the focus is either to start out with an RS Clio or, if your budget allows, go for the more powerful and, for early models, more practical, RS Megane. However, these once attainable cars are now highly sought after by collectors and finding one that’s clean with relatively low mileage is becoming increasingly rare.

So now we turn our attention towards the seemingly forgotten Renaultsport Twingo 133. A quick glance at the classifieds reveals a bunch of hot Clios and Meganes for sale. Heck, there are even four listings for Clio V6s at the time of writing, yet the car we have here is the one of just three Twingo 133s currently for sale on PH. Is it because they’re a hidden gem and owners are hanging onto them for dear life? Possibly. But the fact is there simply aren’t that many owners.

Despite a very lengthy (and likely expensive) spot on Top Gear, Twingo 133s sold in the hundreds, not thousands. HowManyLeft puts the figure at just under 600 in the car’s heyday back in 2010, though that’s dropped to around 430 today. When you look at the car’s pedigree, it seems a little odd that it wasn’t more popular.

Perhaps it was that Renaultsport’s cute city car was positioned too closely to the Clio 197 on price. At £13,165 it was only around £2,000 cheaper than a new 197 at the time, which becomes relatively negligible spread over a finance term. Of course, for buyers, the car with a bit more power is going to win out and handing over the extra couple of grand for a larger car may seem like a no-brainer.

That being said, the Clio 197 was a tad on the heavy side and couldn’t capitalise on the success of its 182 predecessor. Meanwhile, the Twingo 133 was around 200kg lighter at 1,050kg. It also adopted some bits and pieces from the Clio 182, such as the rear-axle layout. Even the 1.6 engine was nicked from a Clio, albeit a standard one, with power coming in at (you guessed it) 133hp courtesy of uprated camshafts. An optional Cup chassis reworked the suspension for a 10 per cent increase in stiffness and a 4mm drop in ride height. No, it can’t match the Clio 197 on outright pace, but some say the Twingo is a bit more fun in the bends.

The one and only original 133 we have on the classifieds doesn’t appear to have the Cup chassis, but you shouldn’t dismiss it. Not only will the slightly softer suspension setup be a little easier to live with, but it still has the same power output and ultra-light kerb weight. We’re also digging the discreet look with the standard 16-inch alloys and Mercury Silver metallic paint.

It’s listed at £3,995 and, to be fair, you can still find the odd Renaultsport Clio in this territory, but these will be high-mile heroes with light modifications. This Twingo, though, has only covered 54,000 miles and recently had timing belt and water pump replacements. Couple that with an MOT that runs until February 2023 and you’ve got yourself a surprisingly rare hot hatch that’s desperate for a B road blast. Tempting. Very tempting…